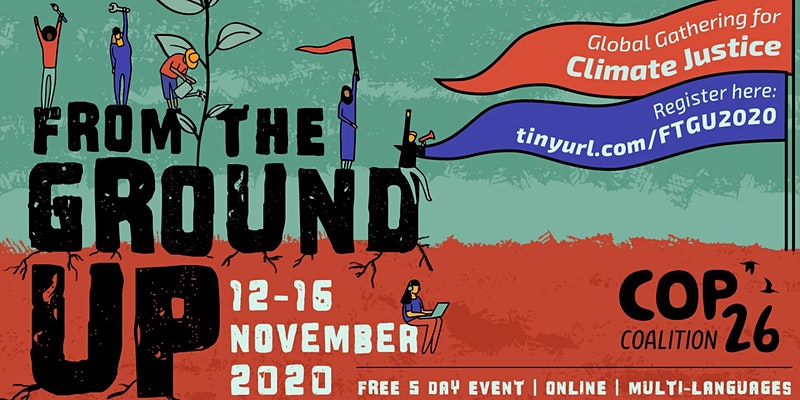 This November, we will be marking the time that the UN climate conference, COP26, should have been happening in Glasgow. Because of the Covid pandemic, these crucial negotiations have been delayed until November 2021.

But climate breakdown has not slowed down and global climate movements are still active. We'll be taking part in the COP26 Coalition's global gathering 'From the Ground Up' 12-16 November.

Watch this space for news of online and offline mobilisation.

The COP26 Coalition held a series of six webinars - Boiling Point: Everything you wanted to know about international climate negotiations - you can find the videos here.

The Conference of the Parties, or COP, is the supreme decision-making body of the United Nations Framework Convention on Climate Change (UNFCCC). Its 195 member countries meet annually for 2 weeks to, in theory, get to grips with the climate crisis. The '26' demonstrates that this will be the 26th such event. Seriously, this has been going on for decades...

In 2015, in Paris, a big step was taken where all the member states signed up to an agreement to aim to limit warming to no more than 1.5C above pre-industrial levels (avoiding some of the most catastrophic impact, but still harming many people and ecosystems). BUT the agreement involved very little in the way of practical commitments to decarbonise or to transfer wealth from richer, heavily polluting countries to poorer nations who are suffering the impacts of climate change. The pledges that were made would set the world on a course not for 1.5C warming, but around 3.5C. The usefulness of Paris depended on increasing these commitments at subsequent meetings. Especially around taking action right now, not just setting long-term targets.

Spoiler: this process (ratcheting up commitments) hasn't really happened. While the US announcing it would pull out of the Paris agreement hasn't helped, governments around the world have comprehensively failed to take real action on the climate crisis. Last December's summit in Madrid was not a success. Can people power shift the deadlock in Glasgow?