‘Biomass’: the new shadow on the bio-horizon

Biomass is the word usually used for solid as against liquid sources of “bioenergy” – bioenergy being energy sourced from living organic matter as against the “fossil” plant matter that has been stored for millennia under the ground as coal, oil or gas.
We have already seen a massive expansion in the use of “Biofuels” which are especially attractive as an easy replacement for petrol or diesel in our liquid-fuel-hungry transport systems. It is now also being burnt to generate electricity in power stations (see below or click here) which is particularly hard to justify given that the special advantage that biofuels have – their liquid form which makes them so easy to use in cars and aeroplanes, for instance – is just wasted.
The use of biofuels is continuing to increase with catastrophic results but the growing controversy around them has meant that there have been some limitations imposed on the rate of increase– and there is the possibility of more. 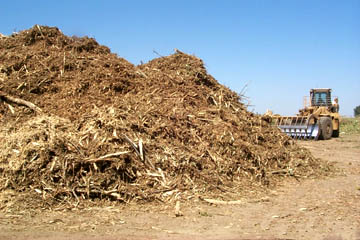 However what we are now seeing is a massive expansion in the use of ‘biomass’ - that is solid forms of organic matter, like wood or acanthus grass. The theory is, of course, the same as with biofuels, that because the plants that the ‘biomass’ is derived from remove CO2 from the atmosphere as they grow then when they are burnt they only put back into the atmosphere what they have already taken out, resulting in net zero emissions. However, if you are starting from the situation as we find it just now then clearly the immediate impact of burning wood, say, is to emit CO2 into the atmosphere, just as burning a fossil fuel would. In fact quite often it emits more CO2 per unit of weight – than coal or most fossil fuels. There is the possibility that new trees growing will absorb back that CO2 from the atmosphere but this takes some time – maybe decades. That means that if there is an urgent need to reduce greenhouse gas emissions in the very short term, then the advantage of biomass over fossil fuel becomes rather debatable. In any case there is a complex set of considerations involved, including the time scale that emissions cuts are needed in, the time it takes for different forms of vegetation to re-grow, the degree to which that re-growth can be guaranteed to take place – and so on.
However the real problem is simply the vast scale on which biomass use is now being proposed – and the impacts on land use that this will surely make inevitable. We are not talking about burning a few fallen branches, or even felled trees, from your local woodland to keep your fire burning in winter – that’s the traditional small scale use of biomass, which has – broadly speaking – been sustainable for many hundreds of years. We’re talking about replacing a significant fraction of the vast amount of energy currently produced from the far more concentrated fuel sources that are provided by fossil fuels. In the UK this means quantities of wood that far outstrip what we can produce in this country. On the basis of all the currently planned biomass projects going ahead the UK’s demand for biomass would amount to more than six times the UK’s annual wood production.

There is much talk of using timber industry ‘residues’ – the sawdust, twigs, stumps and so on not used in traditional timber industry – but there is a downside to this since this means depriving woodland soils of essential nutrients and  reducing their effectiveness as a carbon sink. Once again its when its done on a massive scale, wholesale stripping out of organic matter from an ecosystem, that it becomes destructive. But in fact the scale of biomass proposed means that whole trees and not just residues are being used.

That means we (and our European partners) are injecting significant extra demand into the world wide market for timber. This is when the pulp and paper industry is already pushing the expansion of plantation forestry at the expense of more biodiverse ecosystems (with a higher carbon sequestration potential) like old-growth forest. As North American wood begins to be diverted to supply biomass-powered electricity in Europe so the paper and pulp industry is increasingly displaced to Southern countries where pressure on tropical forests is increased. Altogether the pressure to commercially exploit land and ecosystems to supply the burgeoning demand from rich Northern countries - now not just for products but also energy - is being ramped up, putting yet more pressure on natural ecosystems, biodiversity and traditional land use and the indigenous peoples who depend on that.. This means that the rate of biodiversity loss, for instance, that we are already seeing, will be accelerated. At the same time this is feeding into the roughly 25% of CO2 emissions that currently come from deforestation and detrimental land use change. Whilst the expansion of plantation forestry means there is some new growth and carbon sequestration the loss of old growth forest, disturbance to soils and other destructive practices that come with increased commercial exploitation of the land means that the balance is very much towards diminished sequestration and increased emissions – even if tthat is not always easy to measure..

The problem is that just ‘burning something else’ is so much the easiest way to replace fossil fuels. You can keep your coal-fired power station going this way – maybe with some adaptations, but you don’t have to invest in a whole new technology like wind turbines or solar panels. That means that in fact a very large proportion of what is being described as ‘renewable’ energy is actually ‘bioenergy’ ( in the EU around twice as much the other sources combined) where the emission reductions are dubious and/or time dependent and where the indirect impacts may be highly destructive and actually involve an increase in emissions.

If we redirect our huge and increasing demand for energy, from concentrated sources like fossil fuels to dispersed organic sources then we are inviting a veritable holocaust of destructive demand upon the natural ecosystems that would supply the necessarily vast quantities of organic matter. If we develop a system that finally succeeds in imposing real effective limits on the use of fossil fuels but puts no corresponding effective limits on destructive land use change then we will see the gains made in reduced emissions from the former, very likely cancelled out by the latter – and certainly in the process, the destruction of much that we value in the natural world.
This is why we need to make sure we take the right decisions, the right ‘fork in the road’ as it were, now, before we have invested a huge amount in a destructive cul-de sac from which it will then be difficult or impossible to extricate ourselves from. And even if, and when, we do, a great deal of irreparable damage will have been done.

You can see a map of operating and planned Biomass power plants in the UK here.