The start of the new year has been an interesting and exciting time for us.

As we reflect over last year, with the changes to our planet - the unprecendented melting of Arctic ice and the ever growing certainty of a 2°C or higher global temperature rise, the increasing action being taken by citizens on climate change and progressive steps to work with non-environmental groups to campaign for a future that works for us all, and the departure of the National Coordinator Phil Thornhill; we find ourselves with the opportunity to re-group, re-strategise and face the year with a bold new plan of action.

We are already certain, however, that we want to dedicate more time working with and supporting grassroots organisations.

#Farefail - UK's railways and our climate

On Valentine's day actions were taken all over the UK to highlight the ridiculous state of railway ticket prices. Events were held everywhere from Edinburgh to Durham, York to Manchester, Lancaster to Derby, Birmingham to Nottingham, Wolverhampton to London, Oxford to Wales, Bath to Bristol, and Somserset to Brighton.

Transport is a serious contributor to our carbon emissions - so it makes enormous sense to tackle our transport infrastructure as the demand for travel will not reduce. To read the climate argument see our blog here.

We need to support these campaigns where ever we can - the climate crisis free future will only happen if we build a carbon free society with all and for all.

See how to get involved at FareFail campaign site.

Fuel Poverty Action are calling for a weekend of actions to protest against the "Great Fuel Robbery" that is being orchestrated by the UK Government, E.ON, EDF, British Gas, Scottish Power, N Power and SSE.

This must stop now. Not only can people afford the bills and are dying in their homes, but the pursuit of fossil fuels will ensure that that the situation stays this way as well as perpetuating climate change.

To find out where the fuel bill assemblies are taking place click here. 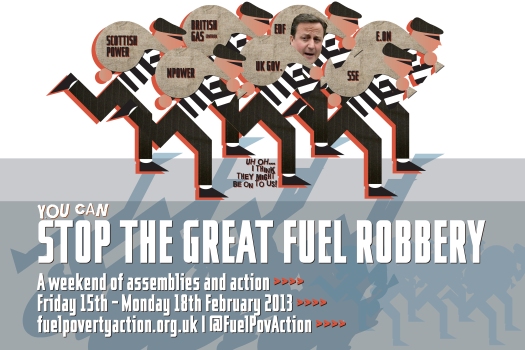 This Sunday, thousands of Americans will head to Washington D.C. to push Forward on Climate and ask Obama to take the first step to putting the US on the path to addressing climate change and reject the Keystone XL tar sands pipeline.

We want to show our solidarity and support to those fighting in North America.  This Sunday we will be sharing a petition that has been prepared by UK Tar Sands Network,350.org, People & Planet and Pembrokeshire Friends of the Earth asking for Nick Clegg to support the Fuel Quality Directive that which would strongly discourage Tar Sands oil from entering Europe - closing off a major new market and thwarting future expansion plans.

Show your support by retweeting and sharing images of those resisting, using the hashtags #ForwardOnClimate #IdleNoMore and #NoKXL on twitter and on Facebook by sharing messages of support to those bravely resisting.

Join the rally at thunderclap - this means that you can join with those in North America directly, both you and they can see how many people have shared, tweeted and posted their resistance to the Keystone Pipeline and we can be united despite our distance.

Look out for the petition on our website as well as other related news and blogs.

Last Monday, Greenpeace launched an online action to fight for our energy bill to include a 2030 carbon-free electricity target. This is ahead of the amendmend that will be voted on the 26th March and is aimed at the Lib-Dems who have the chance to change the balance. Please join in the fight!

'The Battle for Britain has begun. Was it when Chancellor George Osborne called us the environmental Taliban? When he announced he wanted to build 40 new gas-fired stations and turn the UK into a 'gas hub'? When he was revealed in our undercover investigation as trying to dismantle the Climate Change Act? When he rolled out the red carpet for fracking companies across England? Or when he vetoed a 2030 goal in the Energy bill for carbon free electricity?

The Energy Bill currently before parliament is a once-in-a-generation opportunity to clean up our power sector and create low carbon jobs. Along with hundred of business leaders, UK companies, investors and civil society groups, we want to see carbon-free electricity by 2030.

Don't let all your amazing work be undone. The climate - and Britain - needs you. Tell your MP to support clean electricity and green jobs now.'

Come and help us plan for the year's campaigning!

We welcome discussion, thoughts, tactics, that you want to share. To help us have a focused day it would be great if we can begin talking now about what you would like to see us do this year. The Campaign has got a few things up its sleeve but it's important that we take the time to hear what you think. So let's start the conversation!

If you are looking for a starting point, have a look at the minutes from the London meeting on 29th Jan - its focus was on assessing the successes and failures of last year's events to act as a springboard for discussion of what tactics and campaigns we should implement this year. You can also click here to find out about last year's events.

More ways to get involved!

Please consider making a regular donation. We are a very small organisation and need the financial security which helps us respond to events as quickly as we did last week. (Could you help fundraise for us? Get in touch!)

Finally, forward this email to any friends who may be interested.

Climate Change in the news

An Avaaz petition to halt oil exploration in Ecuadorean Amazon gets 1m+ signatures in just over a week
http://www.guardian.co.uk/world/2013/feb/06/petition-oil-ecuadorean-amaz...