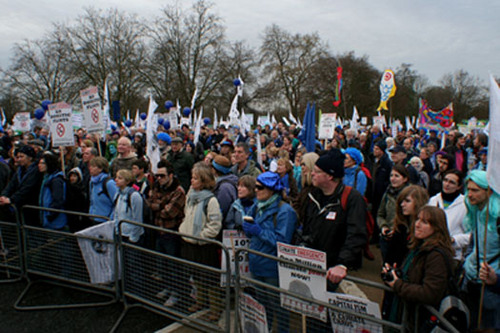 Thousands came togther for the Climate Emergency Rally at the start of  the UK's biggest day of climate protest, yet, on 5th December, the Saturday before the opening of the Copenhagen Climate Talks.  They came to demand immediate and radical action on climate from the UK government.

The rally's key demands were:

These demands were clearly visible on Saturday as hundreds of demonstrators held aloft the Climate Emergency placards. 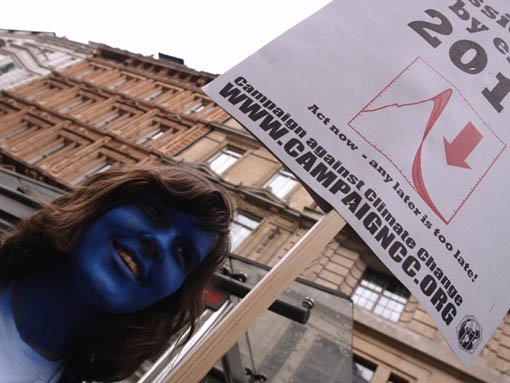 Videos of the speeches can be seen here, and photos from the day are here.

John McDonnell MP, who has signed our EDM 189 outlining our climate emergency demands, championed the active opposition in his constituency to the proposed expansion at Heathrow, while Simon Hughes MP spoke of the link between the climate and economic crises. Bolivian Ambassador Maria Souviron gave a voice to the global south and declared the s responsibility and moral obligation to lead the way in climate action. Chris Baugh represented the links between the environmental and labour movement in our call for green jobs, while Ellie Hopkins celebrated the growing youth climate movement. Seize the Day opened up the rally with a fantastic set of their inspiring songs getting everyone in the mood for a day of action.

The rally was joined by 250 cyclists fresh from the Climate Emergency Bike Ride  who had started the day bright and early at Lincolns Inn Fields hearing speeches from Cllr Alexis Rowell (Lib Dem, Camden Council) and a fired up NIck Hutton (Treasurer Campaign against Climate Change). The ride then headed to BP's headquarters to demand an end to the company’s investment in the Canadian Tar Sands and the agrofuel industry with speeches from Jess Worth of the UK Tar Sands Network and Maryla Hart of Biofuelwatch. Finally the cyclists visited E.ON's office on the Mall to call for an end to dirty coal before joining the rally throng at .

The rally crowd went on to join the Stop Climate Chaos organised Wave event which saw 50,000 people encircling Parliament to call for tough action at . With a blue theme to the event the streets of literally were awash with people in what was the biggest mobilisation the  has ever seen on climate change.

To round off the day supporters visited to deliver a Climate Emergency Letter to Gordon Brown on behalf of the Campaign against Climate Change. Mandee, Dexter, Chris, Rebecca and Pat went to the door of No.10 and handed in the letter that put to the Prime Minister our Climate Emergency demands.