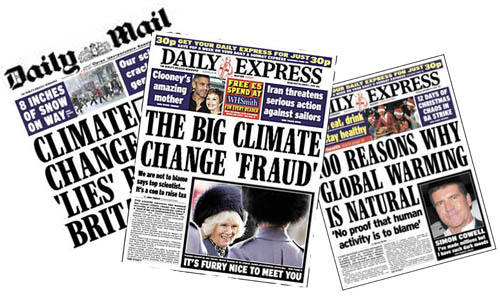 “Climate change scandal” – the headlines proclaim. In fact, the scandal is that the concrete and mounting evidence of the danger of climate change is being ignored by large sections of the media. It instead publishes stories implying the whole thing is a hoax.

The media climate has changed over the past years, such that in 2010, The Express felt complacent enough to publish “Global warming: what a climate con.”

First was ‘Climategate’. In autumn 2009, emails from the University of East Anglia’s (UEA) Climatic Research Unit were illegally hacked and published, just before the Copenhagen negotiations, resulting in a high-profile media storm.  Allegations that climatologists had manipulated results, flouted Freedom of Information laws and prevented critics from being published in the academic literature provoked a global controversy (http://thegwpf.org/images/stories/gwpf-reports/Climategate-Inquiries.pdf). A detailed briefing on this affair nonetheless can be found at https://publicinterest.org.uk/climategate-a-briefer/ - the most telling point being that “[n]ot one piece of evidence or data has been altered or found to be wrong as a result.”

The Institute of Physics – whose statements about UEA’s “worrying scientific integrity” were jumped on by media sceptics to negate the whole phenomenon of climate change – have recently issued a clarification saying that, “our climate is changing, and we need to take action now to mitigate that change", while their submission, it has been revealed, is likely to have been influenced by an energy consultant.

Next came ‘Glaciergate’ in early 2010. Buried in the 3000-page 2007 IPCC report, there was a brief mention of a claim that the Himalayan glaciers would melt by 2035.  The claim was argued to be based on an error and The Times and The Express in particular implied that this significantly undermines the whole report, claiming that this was a “central claim", which is not the case. Nevertheless, the glaciers are retreating at an increasing rate.

‘Glaciergate’ encouraged the search for further ‘errors’ in the IPCC report. Jonathan Leake at the Sunday Times has been particularly keen, announcing ‘Amazongate’ in January 2010. The prediction that global warming might wipe out 40% of the Amazon rainforest was dismissed as an “unsubstantiated claim”. This story was sourced from a climate denial blogger. In fact, as BBC coverage on 30 January 2010 made clear, there is peer-reviewed research predicting this impact. The error in the report was that the reference given was a WWF report rather than primary research. The article was the subject of a IPCC complaint, which in June 2010 was upheld and The Sunday Times was forced to retract the article and issue an apology.

This was followed by ‘Africagate’ - attempts to smear as unreliable the discussion in the report of possible impacts of climate change on African agriculture -  and ‘Seagate’ - an incorrect figure which had been provided by a Dutch government agency for the proportion of the Netherlands below sea level, both in February 2010. See discussion at http://www.realclimate.org/index.php/archives/2010/02/ipcc-errors-facts-and-spin/#more-2832.

Another Times article on 14 February 2010, World may not be warming, say scientists, cites work by Anthony Watts, a climate sceptic, on the location of temperature stations, alleging that some produce poor quality data. However, when the actual data is analysed, the poor quality stations are found to underestimate, not overestimate, any warming trend.

On the same day, The Daily Mail claims Climategate U-turn as scientist at centre of row admits: There has been no global warming since 1995. However, not only did the scientist in question not say these words, but the article also contains other distortions.

Back at The Times on 15 February 2010, an article which has since been retracted, UN must investigate warming ‘bias’, says former climate chief read: “Professor Watson, currently chief scientific adviser to the Department for Environment, Food and Rural Affairs, said that if the errors had just been innocent mistakes, as has been claimed by the current chairman, Rajendra Pachauri, some would probably have understated the impact of climate change.”  Deltoid blog nevertheless later reported that Robert Watson said, “The article distorted my statements - I was interviewed for an hour and it was obvious that the reporter wanted me to say that the authors were biased - I said I did not believe that.”

Futhermore, in 2010, sceptic ex-Conservative MEP Roger Helmer (now UKIP, as of March 2012) used European taxpayers' money in order to pay for advertisements that  read '"Green' Climate Policies: Probably Unnecessary, Certainly Ineffectual, and Ruinously Expensive."  This prompted our petition against  Roger Helmer's use of taxpayers' money to fund denialist propoganda and to tell the European Parliament to disavow the ads and make amends by funding a real "information" advertising campaign about the threats that climate change poses.  Read more about this here.

Climate science is being confronted by growing doubt and criticism. The debacle of the 2009 and 2011 United Nations Climate Change Conferences, in Copenhagen and Durban respectively, clearly reflected the rejection of reality.

The UKIP opposes the Climate Change Act as they do not view it as a global crisis, nor do they accept the agenda of reducing CO2 levels, since they do not consider CO2 a pollutant (https://www.ukip.org/content/features/552-climate-what-they-dont-want-you-to-hear). It calls for a halt of all UK contributions and funding for the IPCC and any EU climate-change policy such as the EU's Carbon Trading Scheme (http://croydon.ukip.org/articles/1445-climate-change-and-ukip-policy).

Somewhat similarly, the British National Party (BNP) believes anthropogenic global warming is “non-existent” (https://bnp.org.uk/news/nick-griffin-leaves-climate-change-eurocrats-speechless). At the end of 2011, Nick Griffin, the party leader of the BNP, claimed that “[c]arbon trading is a money-making scam that enriches big business and the banks, at the taxpayers’ expense. A scam, moreover, that will have a devastating effect on the job market and the ability of Britain to sustain any heavy industry,” (https://bnp.org.uk/news/national/global-warming-scam-being-used-de-industrialise-britain) and that ”[c]limate change never was about drowning polar bears; it was always about big business profit and elite power.” (https://bnp.org.uk/news/national/what-lies-behind-man-made-global-warming-hoax).

The far right are not the only sceptics. Reports from prominent figures such as the former Cabinet Secretary in 2011 highlight the doubts and uncertainties that exist about the rise of global temperatures and the questionable reliance on the IPCC and its somewhat flawed procedures. Find more on this here: http://thegwpf.org/images/stories/gwpf-reports/lord-turnbull.pdf

So far in 2012, wind power has been argued, particularly from the Tory MPs, to be “extraordinarily expensive and inefficient way” of reducing CO2 emissions. (http://www.thegwpf.org/new-report-economic-analysis-reveals-wind-power-worse-than-a-mistake/). Opposition to subsidies and planning policies to wind farms are obstacles to the expansion of wind and other renewable energy and in turn, cutting greenhouse gas emissions and creating 'green jobs' – the more acute issues than the 'unsightly, blighting the landscape' turbines. (https://www.telegraph.co.uk/news/politics/9061997/101-Tories-revolt-over-wind-farms.html)

Shale gas extraction or ‘fracking’ is still viewed by many as 'sustainable energy saviour'. Two earthquakes have already occurred in the Bowland Shale around Lancaster after the independent energy company Cuadrilla launched exploratory work for natural gas extraction in 2011. The connection between the two was swiftly denied by Cuadrilla as 'unlikely' and instead propose as many as 200-300 wells over the next three to five years to meet proposed productivity levels.

Despite the findings of the US Environmental Protection Agency that local groundwater had been contaminated with synthetic chemicals associated with ‘fracking’, Rob Ward, head of groundwater sciences at the British Geological Survey (BGS), further strengthens the ‘fracking’ causation as he declares the risk of groundwater contamination in the UK is 'low' and that it is by no way certain that methane in the water derives from shale gas activities. These claims were made while no sampling has been done at Cuadrilla's site. Pursuing shale gas as a source of endiverts funds away from actually sustainable and more climate-friendly energy sources. (http://www.profeng.com/features/fracking-splits-opinion/page:1)

In the U.S., the Republican Party has adopted outright denial as policy. Doubts over the existence of global warming, whether it is human-caused and whether reducing CO2 emission is the most appropriate approach to tackle the issue are rampant among the Republicans particularly the GOP (Grand Old Party/Republican National Committee) presidential candidates. Some of their views can be seen and heard here: https://www.huffpost.com/entry/earth-day-republicans-climate-change-_n_1444068 and https://www.theguardian.com/commentisfree/2011/sep/04/evolution-climate-republicans-president.

The climate denial is so strong among the Republicans that efforts by U.S. climate scientists to educate the GOP leadership on the scientific evidence of man-made climate change have been futile. No candidate vying for GOP nomination can admit to climate change nor advocate measures relating to the issue. (https://www.reuters.com/article/2012/02/22/idUS334109598520120222). Republican spokespersons and media outlets  have also given disproportionate attention to sceptics’ viewpoints as well as challenged the scientific consensus on global warming. Unsurprisingly, the "percentage of self-identified Republicans or conservatives answering yes to the question of whether the effects of global warming were already being felt fell to 30% or less in 2010, down from 50% in 2007-08. Meanwhile, liberals and Democrats remained around 70% or more." (http://content.time.com/time/health/article/0,8599,2096055,00.html)

This scepticism originates in part from ‘a long-term, well-financed effort on part of conservative groups and corporations to distort global warming science.’ (http://content.time.com/time/health/article/0,8599,2096055,00.html). In February 2012, leaked documents showed U.S. thinktank the Heartland Institute's core mission is to discredit the established climate science. It has been receiving support from wealthy individuals including the Koch brothers and corporations such as Microsoft and RJR Tobacco, and has been making payments to bloggers, experts, schools and scientists to cast doubt on climate science.

Undeniably, however, sceptics’ campaigns in the U.S. played a crucial role in preventing domestic and international policymaking and agreement on climate change and efforts to reduce global warming pollution.

An insight into how sceptics work - follow the funding
It has recently been revealed that Koch Industries, a little-known, privately owned US oil company, paid nearly US$50 million to climate denial groups and individuals between 1997 and 2008.  In a similar period Exxon Mobil paid out around $17 to $23 million. Closer to home, it has been suggested that Shell's funding of an exhibition at the Science Museum may be linked to the museum stepping back from its earlier strong stance on climate change.
Those who actively promote climate scepticism are well networked, and have been termed 'deniers' rather than sceptics because many show scant regard for the facts, while seizing avidly on any error in the work of climate scientists.  This article discusses the psychology of climate change denial.
We have put together a hall of shame featuring the worst offenders.

Fight back on the blogosphere. Find out how here.
Join our new Facebook group.
Finally, have a laugh
Some deniers are clearly simple charlatans. Watch George Monbiot expose one here:
https://www.youtube.com/watch_videos?more_url=&video_ids=VBQCsMJm3Zg%2CG7y6xJbcW4A%2CSPdhUdF6SJ4&type=3
This article by satirical news website The Daily Mash is not far from the truth: https://www.thedailymash.co.uk/index2.php?option=com_content&task=view&id=3286&pop=1&page=0&Itemid=81 (note that the article contains strong language)
Listen to comedian Marcus Brigstocke's take on climate change denialism:
https://www.youtube.com/watch?v=VFej3bdxQjk