A rising tide of lies, ignorance and disinformation on climate change… where is it coming from? 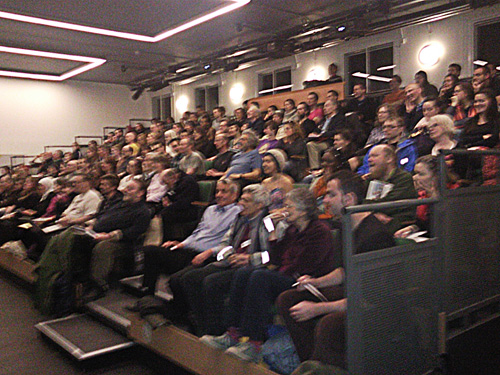 The climate sceptic event held on Wdenesday 14th April was a great success. The lecture hall in SOAS was filled to capacity, clearly understanding and countering climate scepticism is important to everyone. The evening kicked off with a screening of the new video promoting the Climate Emergency Vigil which got a great reaction and, through the comments of those like James Delingpole and Nigel Lawson served to highlight the problem we are up against.

The speakers all tackled the problem from a slightly different angle according to their interest. First off was Ben Stewart from Greenpeace who reminded us that in this case “being right is not enough”, as shown by the slow reaction of UEA to the email leaks, we need to work harder to explain ourselves and avoid complacency.

Next David Adam, the Guardian environmental correspondant, gave some of his insight into the media workings – where the sceptic movement acquires its respectability. He was more positive than most, pointing out that scepticism is almost unique to bloggers and journalists and is rarely taken up by business leaders or politicians to the same extent.

Finally George Marshall (from COIN) explained, with the help of Toucy the Toucan, some of the psychology behind scepticism. He highlighted the importance of reaching out to as many diverse groups as possible on the grounds that people believe what their friends and peers believe more than what experts tell them. After a rousing speech by the Phil Thornhill (our national coordinator) about the need for radical campaigning in the debate it was on to questions from the audience.

After some initial questions on the subject we finished with a specific discussion, from panel and audience, on how to combat scepticism as a movement. Solutions were offered, some more practical than others, and it was agreed that we all must be alert to scepticism as it appears in the national media and counter any false or misleading claims, as well as spreading the truth about climate science as much and as far as possible. Debate among those present was informed and interesting and on the whole the audience were hopefully left more filled with optimism than at the beginning.