Zero Carbon by 2030: Action for the Climate Emergency 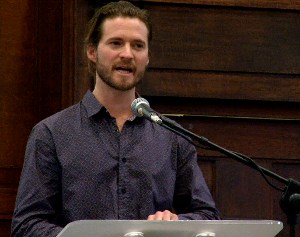 A great event was held in Friends House on Saturday October 30th with a rich diversity of speakers and fast-paced sessions interspersed with music and video - and plenty of time for discussion. The theme was creating a Zero Carbon Britain by 2030 but the climate crisis was addressed from a variety of angles. The serious speaker sessions were followed by some great music in the evening concert that followed.... and the sounds even kept going in the pub till late at night...
Video highlights from the speaker sessions have been uploaded here.
Speakers included Jonathan Essex (Green Party), Maria Souviron (Bolivian Ambassador), Alexis Rowell (‘Cutting the Carbon’, Camden CAN), Andrew Simms (New Economics Foundation), George Marshall (founder, COIN), Ben Brangwyn (Transition Towns), Vicki Hird (FoE Real Food Campaign), John Stewart (HACAN, AirportWatch), Stephen Murphy (‘Zero Carbon Britain’ Team), Deepak Rughani from Biofuelwatch. See more about the speakers here.
The Copenhagen debacle made it clear that we will not see any kind of effective reponse to the Climate Emergency coming out of the international negotiations before there is a radical shift in climate politics and policy at the national level. What we are seeing in the UK, however, is a painfully slow, faltering and piecemeal approach from a government that clearly does not regard the imminent threat of catastrophic climate change as its first priority. What we need is a coherent plan of radical action on a scale sufficient to match the threat.
We know the curent response to the climate crisis is woefully inadequate - the meeting presented a positive and realsitic alternative to this.
The timetable for the day was:
with musical interludes and video by Andrea Gordillo.

“Oh gosh! Oh help! Oh no!”
What the latest science is telling us by Jonathan Essex. Phil Thornhill expands
on this to bring it into the campaigning world.

Caroline Lucas is leader of the Green Party and the first elected Green MP in the UK. Before being elected to the House of Commons in May this year she had been Green MEP for the South East since 1999. Green Party policy is to reduce UK emissions by 90% by 2030, with (roughly) 10% cuts per year from now until then,.

John McDonnell has been the Labour MP for Hayes and Harlington since 1997 and played a major role in the fight against Heathrow expansion (in his constituency). He represents a powerful voice on the Left of the Labour party - serving as Chair of the Socialist Campaign Group, the Labour Representation Committee, and the "Public Services Not Private Profit Group".

Johann Hari is an outspoken journalist on climate change ( and many other subjects !) He is an inveterate battler against greenwash and half measures and has offered a radical critique of , for instance, the corporate subversion of environmental groups in the US.

Ben Brangwyn is one of the founders of Transition Towns, perhaps the biggest grass-roots climate network in the UK with over 300 communities recognized as official Transition Towns in the UK. The transition Town movement focuses on ‘energy descent’ at the local level to combat the twin threats of climate change and peak oil.

Maria de Souviron is the UK ambassador of Bolivia where a Southern challenge to corporate Northern dominance of the international Climate Talks began to emerge at the Cochabamba conference in April this year. Bolivian President Evo Morales has been outspoken on Northern responsibility for the climate crisis and convened the Cochabamba conference to offer a ‘peoples’ alternative’ to the ‘Copenhagen Accord’ imposed by the US and other countries last year. The Cochabamba declaration argues for a radical target of 1 degree and 300 ppm.

Stephen Murphy is the public spokesperson for the team from the ‘Centre for Alternative Technology’ who produced this summer’s ‘Zero Carbon Britain’ report. Controversial in many aspects the report nevertheless offers a coherent, holistic, research-based plan for deep and rapid emissions cuts in the UK. It gives credibility to ambitious targets and provides a stimulating basis for debate for a radical way forward…

Andrew Simms is policy director of the New Economics Foundation and head of its Climate change programme. He is a leading proponent of the ‘Green new Deal’ having co-authored the groundbreaking Green New Deal report and co-founded the Green New Deal group.

Chris Baugh is the assistant General Secretary of the PCS (Public and Commercial Service Union) which has played a leading in promoting the “One Million Climate Jobs Now!” campaign, with Chris, himself, as their outstanding spokesperson.

John Stewart is the  master strategist behind the successful campaign against the proposed third runway at Heathrow. For many years a prominent anti-roads campaigner John is the chair of HACAN Clear Skies and of Airport Watch.

Vicki Hird coordinates the Friends of the Earth ‘Fix the Food Chain’ campaign, which highlights some of the more overlooked sources of climate destabilising emissions – namely those that arise from land use change and deforestation which are largely the result of production to feed the demand in the UK and other Northern countries, particularly for feedstock for a growing industrialised livestock industry.

George Marshall was for many years a driving force in Rising Tide and subsequently the founder of COIN – the Climate Outreach and Information Network. He is also an author, raconteur and performer with his own very special take on the climate crisis.

Alexis Rowell is the founder of ‘Cutting the Carbon’, the Councils coordinator of the 10 by 10 campaign, and a Lib Dem councillor, himself, for Camden Council from 2006-10. He is joint coordinator of Transition Belsize and Camden CAN (Climate Action Network).
Weight:
20
‹ Climate Emergency Bike Ride 2010 up National Demonstration against Agrofuels ›