Hundreds of protesters from the local community and from all around the country gathered on the Isle of Portland, Dorset, to protest against a proposed palm oil burning agrofuel  power station. Coachloads from London and Bristol and individuals from as far as Leeds, Aberdeen and Newport joined hundreds of local campaigners to march from Chesil Beach Car Park, along the seafront to the narrow street that leads to the entrance to Portland Dock, the site of the proposed plant. 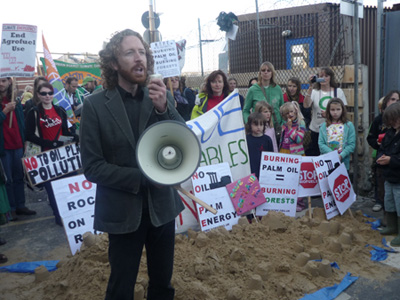 Here Andrew Butler from the local campaigning group 'NOPE' (No Palm Oil Energy') drew a symbolic 'line in the sand' against any further expansion of the use of agrofuels for energy.

The Campaign against Climate Change joined together with NOPE ( a very strong local campaigning group see https://nope.org.uk/ ), Biofuelwatch and Food not Fuel to jointly organise the protest.

Speeches were made outside the port, and a note of support read out from Poole MP Annette Brooke. Members of  'Seize the Day' played to the crowd and many campaigners gathered afterwards at St George's Hall on the island for food, workshops and more music from Seize the Day and a local band. See a report of the demo with more photos on the NOPE website here, and there is also a photo gallery on Demotix.

The protest was filmed by BBC South (see here) and had already been widely reported in the local press (see Dorset Echo article here) Meanwhile news also surfaced that Chris Huhne, following our small protest outside DECC (see below) at which we were able to directly confront him, had reported to the 'Green Lib Dems' at the Lib Dem party conference that he was getting his lawyers to investigate the level of subsidy given to developers of the Portland agrofuel power station. We desperately need to keep the pressure up but there are some signs that our protests are already having some impact on this crucial issue.

There is a wave of proposed new agrofuel power stations sweeping the country. The logic of the Portland protest was that if we can stand up to them here,  we can stop this wave in its tracks.The headlong expansion of agrofuel (biofuels produced through intensive agriculture) use threatens to destroy the world's remaining primary forests, exacerbate the global food crisis and cause a massive increase in climate-destabilising emissions. We need to make the battle to stop the Portland plant the battle that wins the war against the disastrous expansion of the agrofuel industry.

The timeline of the event looked something like this

9.40 am: Bus leaves London (late) for Portland
1.30 pm: Locals and others assembled at Chesil Beach Car Park. March started to spread out along the foreshaw.
1.45pm Londoners spill out of their coach to catch up with the rest  of the march, banners unfurled and flags waving.
2.30 - 3.30 pm: Rally outside port gates (site of proposed plant). BBC film drawing of line in sand and speeches.
4.30 pm:  Workshops and entertainment in St George's Hall
7.30 pm: Bus set off back to London.

View in a larger map

The application for an agrofuel power station in Portland was approved in January (after the initial rejection was overturned on appeal by the company making the proposal, W4B). The power station will burn palm oil and increase by one third the volume of palm oil currently being imported to this country for energy usage. See more here.  W4B are planning an even bigger plant in Bristol, so stopping W4B in Portland will help to stop them in Bristol, too!

Agrofuel burning power stations like the one In Portland would not be going ahead were they not subsidised by the government. Insanely, agrofuels are classified as a renewable energy and as such receive subsidies - so that, in effect, the government is subsidising massive deforestation in South East Asia (and other places), thereby accelerating, rather than slowing down, the destabilisation of global climate.

The fight against this insane subsidy, against the Portland plant and the wave of agrofuel power stations sweeping the country and against the 'false solution'  of agrofuels in general, will go on!