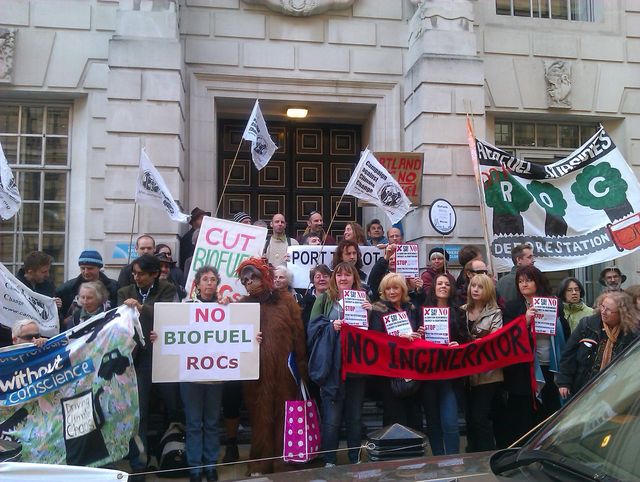 Protesters gathered outside the Department of Energy and Climate Change offices calling for the end of subsidies for bioenergy, in a demonstration organised by Biofuelwatch with the support of Campaign against Climate Change.

As a public consultation on the financing of renewable electricity launched last week, campaigners warn that government proposals to prioritise bioenergy over wind and solar will speed up global warming and cause human suffering across the globe. Campaigners travelled from as far as the Isle of Wight, Scotland, Bristol, Port Talbot in Wales, and Manchester to unite in a common call.

Bioenergy currently accounts for 82.5% of the UK’s renewable energy generation. But Biofuelwatch and Campaign against Climate Change warn that bioenergy power generation, which involves burning fuels such as wood pellet from Brazil and palm oil from Malaysia, speeds up deforestation, climate change and land-grabbing in the global South. Last month, the European Environment Agency cautioned that Governments across Europe are ignoring the true carbon costs of bioenergy, and that it can release more carbon emissions than traditional fossil fuels.

Biofuelwatch has estimated that the existing subsidies for bioenergy have already caused a surge of at least 42 new planning applications for bioenergy power stations across the UK, which, if built, will cost the public £3 billion in subsidies each year.

Earlier this year, the UN identified the UK as the third largest land grabbing country after China and Saudi Arabia with over a million hectares acquired for biofuel production, mostly in Africa. This area represents about 10% of UK agricultural land.

Emilia Hanna, Biofuelwatch campaigner, said, 'Colonialism continues because of our consumption addiction in the West, in Europe, in the UK, and in the areas where people have travveled from. The government's latest proposal to continue the subsidies for biomass and bioliquids is what is fuelling our addiction. Companies are promised profit, so thay are going for biomass and bioliquids on a massive scale, with 60 million tonnes of wood and 400000 tonnes of bioliquid demanded per year. This will come mainly from overseas leading to more land grabbing and more forest destruction. We are here to show that we are united in our call of NO to subsidies for biofuels and biomass, and YES to reducing our consumption in the West.'

Biomass use is also incredibly polluting and can release more emissions than ordinary fossil fuels, threatening people's right to live in a healthy environment. Jayne Dillon, campaigning against a biomass incinerator in Trafford, near Manchester, said, 'We are facing a proposed 25 year sentence of biomass incineration in our suburban, family-based community in Manchester. We already tolerate elevated levels of air pollution and we are determined that this dirty technology which releases a wide range of harmful emissions, including arsenic, will not be built. Too much evidence exists which associates these air pollutants with serious illnesses and deaths and this cannot not be ignored. We don’t want this incinerator to operate and generate profit at the expense of our health, as the burden of decisions made now will be carried for decades.'

See more on the CCC Biofuels page or find  more information about ROCs on the Biofuelwatch website here.

Learn more about biofuels, come and discuss how to stop this destructive bandwagon, at the Biofuels workshop at the Climate Justice Conference on Saturday the 12th November.

Weight:
10
‹ 2011 events up Public Meeting: The real cost of subsidies for biofuel and biomass electricity ›