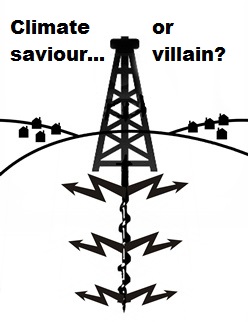 Shale gas is methane (natural gas) which is trapped in impermeable shale rock deep underground. The gas cannot flow through the shale, so simply drilling a well, as you would for conventional natural gas, is not enough. The shale rock must be cracked to free the gas, so large quantities of water, sand, and a range of chemicals are pumped in under high pressure (hydraulic fracturing or 'fracking'). Tens or hundreds as many wells are needed to produce as much gas as in a conventional gas field.

Current government policies, driven in particular by the Chancellor, George Osborne, promote shale gas as a solution to the UK's energy needs. But the facts suggest otherwise:

1. Proven global reserves amount to five times as much fossil fuel as could be burnt between now and 2050 and keep under 2°C of global warming. This basic fact is frustratingly often absent in media discussions about exploiting about yet another source to exploit.

2. Without effective policies to limit carbon emissions there is no reason to think that shale gas in Europe will push out coal – it is just as likely to compete with renewables.

3. There is a big question mark over whether shale gas exploitation is actually any better for the climate than coal burning. It all depends on how much gas leaks out during the process, since methane is a shorter lived but much more powerful greenhouse gas compared to CO2.

It is suggested that there will be climate benefits if leakage is less than 3.2%. The US Environmental Protection Agency estimates overall leakage to be 2.4%.
However, other modelling calculated that leakage needs to be kept below 2%. NOAA researchers in Colorado have now confirmed previous measurements that 4% of methane has been leaking out. They also reported preliminary results from a field study in Utah suggesting 9% was escaping into the atmosphere. This is not conclusive, but should be highly worrying for anyone wanting to rely on shale gase to reduce emissions.

4. An expansion of gas-fired power stations is not compatible with the UK’s carbon emission targets. The Committee on Climate Change has repeatedly warned the government of this. The lack of proven carbon capture and storage technology is worth noting when predicting future emissions.

5. Gas reserves that are economically, practically and politically extractable will be a small fraction of the resources in the ground. No one knows how much of the estimated 1,300 trillion cubic feet of gas under Lancashire can be got out, or how much that will cost. Last year, the US Energy Information Administration estimated the UK recovery rate at 4%. In discussions about how many years' worth of gas there might be, it is rarely pointed out that renewables have no such limit.

6. The UK is not the US. Compared to the US, which has experienced a shale gas boom, the UK is more densely populated, has better environmental regulation, little history of onshore drilling, and is well integrated with the European gas markets. Its geology is also more complex.

7. Analysts generally agree that exploitation of UK shale gas would have little impact on prices.

8. Even in the US, the situation is more complicated than often portrayed. A switch from coal to shale gas has contributed to a fall in CO2 emissions - but firstly this does not take into account any methane leaks, as described above, and secondly energy efficiency and renewables also contributed. The knock-on effect of increased shale gas and lower demand for coal in the US was increased exports to Europe where coal burning went up.

9. Experience in the US shows that local environmental impacts can be significant. These include water contamination with methane and other chemicals used in the process, and air pollution, leading to reports of health problems among those living near wells. More mundane impacts such as vehicle movements, landscape, noise and water consumption may also be problematic.

10. Fracking is not the only form of unconventional gas exploitation we are facing. Coal bed methane (extracting gas from coal seams) is further advanced in the UK. This has been associated with, if anything, greater local problems with water pollution and leaking methane, since large quantities of water are pumped out of the coal seam (water that has been marinading in coal for thousands of years), and the coal seams are closer to the surface.