This is what it looks like on the front line of the fossil fuel industry in 2016. As water protectors at Standing Rock attempted to remove burned-out trucks that had been blocking the bridge, police attacked them with tear gas, concussion grenades, rubber bullets and water cannon in subzero temperatures, seriously injuring many. Reports suggest 300 people were injured and 27 needed hospital treatment. 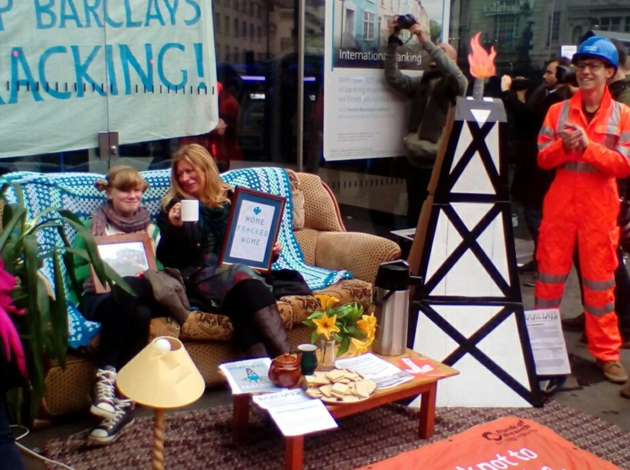 In over 90 branches of Barclays around the country, customers have recently been surprised to meet campaigners Bringing Fracking Home to Barclays. In various creative ways, these campaigners have highlighted the bank's ownership of Third Energy, who want to frack for shale oil in the beautiful North Yorkshire countryside.

In central London, removal men delivered a sofa to a prime spot outside the Piccadilly Circus branch of Barclays bank, where Nicky Holling, a resident from Ryedale and her daughter Ruby, were served Yorkshire tea and biscuits. There was music, dancing and speeches in what was a family friendly event, organised by groups including Friends of the Earth, Divest London, Frack Free Ryedale, 350.org, Sum Of Us, Frack Off London, Go Fossil Free and Reclaim the Power. Campaign against Climate Change supporters joined around 100 people assembled over the 90 minute protest which shut down the branch, many activists vowing to return until the bank get the message and divests.

The GMB's criticism of the Labour Party’s 2016 conference decision to ban shale gas fracking has been widely quoted in the press, with an assumption that this is representative of the wider trade union position.

The GMB’s Scotland secretary, Gary Smith, said it was “not ethical” and an “abdication of our environmental and moral responsibilities” to become increasingly reliant on gas from dictatorial regimes overseas (although most of our gas imports come from Norway).

Yet the GMB is the only major UK trade union to actively support fracking in the UK, which is opposed by Unite, Unison, PCS, Prospect, the Fire Brigades Union (FBU), the Universities and Colleges Union (UCU), among others, as part of their wider commitments to tackle climate change, move away from fossil fuels, and protect the environment (see details below)

Unions have not only taken on board the climate change impacts of shale gas industry, but recognise the serious issues for worker safety and doubts over the industry’s claims of a jobs bonanza.