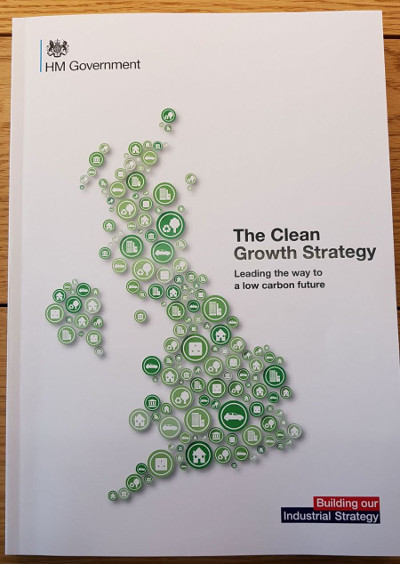 There are some positive steps forwards. Home insulation had all but ground to a halt with the removal of schemes to support it - the promise of £3.6 billion investment to upgrade around a million homes is welcome. Another £1 billion is promised for electric cars and £1.2 for cycling and walking.

£900 million is promised for research and development, with £460 million of this going to nuclear, £265 million on electricity storage and grid technologies and £177 million to renewable technologies. The Hinkley Point cost fiasco has clearly not blunted appetites for nuclear energy.

Offshore wind is given a boost, with plans for up to 10GW of offshore wind to be built in the 2020s. Yet onshore wind still appears to be off the menu (except in Scottish islands).  It is extraordinary that the cheapest form of renewable energy is still blocked from competing on a level playing field, despite being relatively popular with the public.

There are also no clear measures to boost solar, another cheap renewable technology, despite deployment having plummetted after government cuts. The Solar Trade Association expressed disappointment that the tax and regulatory framework was still not giving them a level playing field.

Among the omissions, it is noticeable that there is no mention of fracking - is the government cooling off its enthusiasm for shale gas?

Another issue, as we expected, almost entirely absent, is the thorny question of growing aviation emissions. How can keeping within our carbon budgets be compatible with a new runway at Heathrow? (spoiler - it can't)

There are many more policies trailed in the strategy, some detailed, some less clear at this stage.

But perhaps the most important thing to note about the strategy is that it is not expected to be sufficient to reduce our emissions enough to stay within the UK's carbon budgets from 2023. As the table below shows, the gap widens further from 2028 onwards. This failure would make it much harder to achieve longer term targets from the 2030s onwards.

When international aviation and shipping were left out of the 2008 UK Climate Change Act, this caused concern. Would cuts elsewhere be cancelled out by increasing emissions from these sectors - the equivalent of our carbon bloated economy going on a diet, but one in which all calories are counted (except those from chocolate and cake)?

The Committee on Climate Change, set up under the Act, had a solution. They set a 'planning assumption' - a limit they recommended the government keep aviation emissions below - of 37.5Mt carbon a year. The committee sets gradually shrinking carbon budgets for other sectors of the economy to allow for this level of emissions from aviation. So the overall aim of the Act - to reduce UK emissions by 80% by 2050 - can be achieved in a meaningful way.

It is difficult to reduce emissions from flying, since it's inherently energy intensive. Recognising this, aviation was therefore given a generous allowance, limiting emissions at 2005 levels, rather than the dramatic cuts expected from other sectors.

But from the government's support for a third runway at Heathrow airport, and their current consultation on aviation strategy which focuses on growth, it appears they have no intention of keeping to these limits. The idea is that increasing emissions from a growing aviation industry can be dealt with internationally, freeing us from any obligation to attempt to limit emissions here. Unfortunately these solutions have about as much credibility as the click-bait diet ideas that pop up on the internet: "This one weird tip" which produces amazing weight loss. They seem too good to be true - and they are.