Why do we need a Climate Bill ? 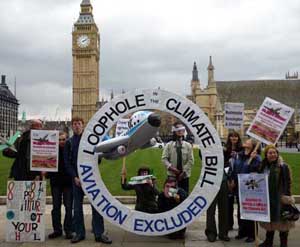 Basically whatever we do to reduce emissions, whatever brilliant initiative we come up with to increase energy efficiency, increase renewable power, improve building insulation, public transport, whatever......... it risks being "cancelled out" by some increase in emissions in another sector. This is especially so when the relentless pressure from economic growth tends to result in more and more activities that require energy and generate more emissions. So thats why we need to have an OVERALL target to aim for. Or to put it another way, why the government needs to have an overall 'national' target to be kept to. Thats what the 'Climate Bill' is about - establishing that national emissions reductions target in law. Its really the same as what we are trying to achieve at the annual UN Climate Talks (when we have our big demo every year and the Global Day of Action) at the global level - of course ultimately its the global target or 'cap' thats the only thing that really matters, but we are not likely to get that unless some countries - like hopefully the UK - blaze the way and set an example that others might follow - or at the very least effectively demonstrate that we are prepared to 'do our bit'.

Now of course its true that establishing a target is one thing, but getting the government to keep to it is another....and that's the case even if it is established in law by Act of Parliament.....the history of governments and their record in keeping to targets is not a happy one. Thats why getting the government to keep to a national emissions reductions target may be much harder than just getting that target established (even in law). Thats why we need to campaign hard on material policy issues ...like say airport expansion (Heathrow's 3rd runway !) or new coal-fired power stations (Kingsnorth !) to make sure that the government is adopting policies that are consistent with reaching the target ....not investing billions in something that will inevitably result in a huge increase of emissions etc..... However, this has to be done within the framework of an overall target - as part of pushing for an overall target - or it could be a victory, or step forward, in one area that is matched by two steps back in some other sector. Or in other words even though keeping to the target may be harder than just establishing it....its still really important to establish it in the first place ! So we need to campaign for an effective Climate Bill and on things like Heathrow, Kingsnorth etc....

What we need to get to make the Climate Bill stronger

Of course its important that the target we establish is as rigorous as we can possibly achieve and that the general framework of the Climate Bill as as loophole-free as possible. That the Climate Bill has come about at all is largely as a result of the initiative of Friends of the Earth and their "Big Ask" campaign. What we are pushing for now, in line with the "Big Ask" is a climate Bill that is as effective as possible, so what we are pushing for specifically is

1/ An overall target of 80% emissions reductions by 2050, rather than just 50% as the government has proposed (but it is showing signs of shifting on this). Many people feel that even this will not be enough, so we need to insist it is at least 80% and that there is a provision to increase it if new scientific evidence comes to suggest that that is what we need. It is at least a better target than the one we had before.........

2/ The Bill should include aviation and shipping. The omission of these two is a glaring loophole in the bill - under the flimsy excuse that because these things are "international" they cannot come under a national target (there are adequate ways of calculating a 'national share' in fact). Clearly the target has to cover all emissions or it is not a real target !

3/ "Annual argets" . That is that the targets should be assessed annually otherwise they wil be very hard to enforce. If they are five yearly targets for instance, the government in power may be lax in doing what needs to be done to keep to them, knowing that they can get way with it in the short term and a successor government may then turn round and say (conceivably with some justification but quite likely just as an excuse) that it is no longer possible to keep to the target because the previous government let things get too far out of control...So we need annually reviewed targets (of at least 3% per annum).

What can you do?

The Friends of the Earth "Big ask" campaign is recommending that you write to your MP to ask that he or she supports a strong climate Bill and you can do that here.

Finally a 'parallel' thing you can do - at the local level - is to campaign for your local council to adopt annual emissions reductions targets. Some CCC groups are already doing this : see what's going on around the country here. And why not start a campaign to get your own coucil to reduce emissions ?

"Flying through the Loophole in the Climate Bill"

Parliament square, Saturday 5th April - CCC activists took the message to Westminster - Aviation must be included in the Climate bill ! If aviation was included in the bill and the government was serious on putting a cap on all UK emissions, there would be no need for a 3rd runway at Heathrow ! We bring the alien concept of joined-up policy-making to Westminster ! This was on the Friends of the Earth Day of Action on the Climate Bill, at the climax of a week of actions on the Bil.

Below are some actions carried out by Campaign against Climate Change groups in support of a strong Climate Bill in 2007 and 2006 :

Demonstrations for a CLIMATE BILL that really works 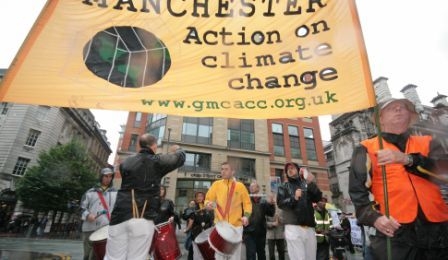 On the first weekend of his premiership Gordon Brown was greeted with a demand to make Climate Change his priority and for a climate Bill that would be really effective. There were demonstrations in Manchester and in Parliament Square, London, demanding that the climate Bill have annual targets so that there could be no 'buck-passing' from one government to another and a target of at least 80% (rather than 60%) emissions reductions by 2050 - in line with the latest (rather than outdated) science.

In Manchester Over 200 people braved torrential rain to attend Manchester's first Carnival against Climate Change. Speakers included Derek Wall (Male Principal Speaker of the Green Party,) Cllr Neil Swannick (Lead Councillor for the Environment, Manchester City Council,) Elaine Graham-Leigh (Environment Spokesperson for Respect) as well as Sage Smith and Kevin Maw from School Students against Climate Change. A large contingent of Congolese refugees joined the carnival in order to draw attention to the role of Western corporations in destroying the rainforest in the Congo - rainforest destruction being one of the major contributory factors towards climate change. See pictures here .

In London Colin Challen MP addressed a gathering in Parliament square. This was after a mock "coronation" of Gordon Brown in which he inherited the Blair 'legacy' of a rise in UK CO2 emissions of 2%. Colin Challen was joined by Aubrey Meyer, of the Global Commons Institute, and both insisted that 'Contraction and Convergence' (a global framework for reducing emissions in an equitable way) should get a mention in the Bill. Also speaking were Phil Thornhill for the CCC emphasising the importance of annual, effectively reviewable and enforceable, targets and Lucy Wills, in mermaid costume, to remind us that the disastrous floods we were seeing now could just be the beginning......we'd all be joining the mermaids underwater soon unless we get our act together on climate change fast. 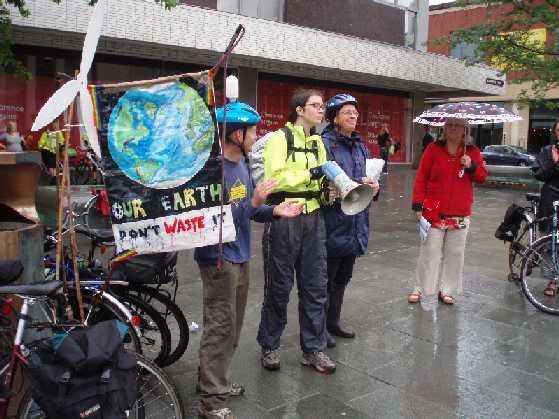 In Sheffield 40 cyclists braved the rain, cycling round Sheffield city centre, some in wetsuits, some as clowns, and with banners and a wind turbine drawing attention to the urgency of addressing climate change. The cyclecade was organised by Sheffield Campaign Against Climate Change, launching a petition calling on Sheffield City Council to implement a Carbon Reduction Plan to reduce carbon dioxide emissions across the whole city by at least 6% a year. Speakers, who included Green Councillor Bernard Little, Maxine Bowler from Respect, Liddy Goyder from Friends of the Earth and Richard Spooner from Christian Aid, all emphasised the urgency of reducing our greenhouse gas emissions to stop the worst effects of climate change both for Sheffield and the world. They called for practical measures such as integrated and affordable public transport and home insulation. Many passers-by signed the petition which will be presented to Sheffield City Council in October. 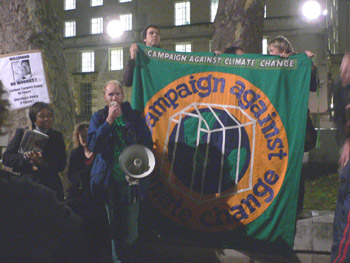 The demo was on the evening before the Queen's Speech in which a Climate Bill was to be announced. The Bill is essentially in response to the The Friends of the Earth "Big Ask" campaign which has been pushing for annual emissions reductions targets of 3% (as proposed in the associated Early Day motion 178), but David Milliband and the government have so far been opposing the proposal for annual targets. Given the record of increasing emissions levels under this government so far we must have the discipline of ANNUAL targets or they will simply put off making the tough decisions that need to be made. Blair himself has said we only have 10 years to act so if we have ten yearly targets we only need to miss them once and then.
We were pleased to have Luis Evelis Andreade speaking. Luis is the president of the National Indigenous People's Organisation of Columbia. He spoke of the urgent need to tackle this issue, especially so as not to further diminish the livelihoods of peoples in poorer countries.Also speaking at the event was Nic Hutton from the campaign and Leo from Plane Stupid. Speeches were followed by chanting.

The results have now come in ! The Queen did not announce a Bill with annual emissions cuts, just as we feared. She did however propose:
placing the target to cut CO2 emissions by 60% from 1990 levels by 2050 on to the statute books
establishing an independent "Carbon Committee" to work with ministers to deliver reductions "over time and across the economy"
creating new powers to ensure the 2050 target is achieved
improving the way CO2 reductions are monitored and reported, including to Parliament

It looks like the fight goes on for ANNUAL targets!