No backtracking on climate!

Climate activists braved an early start at 8.00am on the morning of Monday 16th May to demonstrate outside the Lib Dem HQ, at 4 Cowley Street, Westminster - as part of the battle to make sure the government does not cave in to short term economic interests and weaken climate targets. 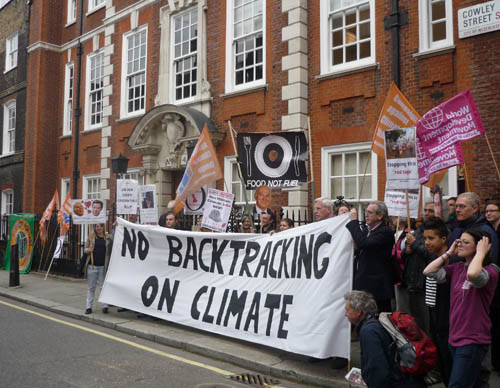 They handed in a letter before moving on to Downing Street at 8.45am.

The demonstration took place after the Observer had reported that the combined pressure of the Green Movement had borne fruit and the Government had now accepted the recommendations made by the independent Committee on Climate Change, for relatively ambitious cuts in emissions up to 2030..However more recent news suggests the picture is much more complicated as to precisely how much of the recommendations the government is agreeing to. See here and here. A public statement is expected on Tuesday.

This is how the story unfolded from early last week:

On Monday May 9th The Guardian broke the story that the chief executive of the Committee on Climate Change warned that a key cabinet decision on whether or not to stick to the UK's climate change targets was imminent, describing it as "the key test of the government's green credentials".

Later that day, Friends of the Earth called for Chris Huhne, the minister for Energy and Climate Change to resign if his fellow ministers renege on targets. Soon, George Monbiot had penned an article about it and the Guardian printed a follow-up story, claiming that Vince Cable had clashed with Huhne, arguing that an aggressive level of cuts would be "would be detrimental to UK", arguing instead for a weaker target. This led to public outcry, with the heads of 15 environmental NGOs writing an open letter to the Prime Minister, as well as the leader of the opposition and former Energy and Climate Change minister Ed Miliband writing his own letter.
-------------------
The letter handed in by activists took the form of a reminder to the Lib Dems and to the government, that despite the apparent victory for the greener forces within the government we are still courting climate disaster until we see a real quantum leap in the scale of our response to the climate crisis.

This is because – in particular:

1) The Committee on Climate Change recommends an increase in the use of biofuels which will do more harm than good.

2) The Committee’s recommendations do not take into account the effective outsourcing of a large proportion of UK emissions to countries like China to feed our increased demand for consumer goods.

3) In the light of the latest science, the targets enshrined in the Climate Act are inadequate. This is what those at the sharp end of scientific research into climate change are saying, like Kevin Anderson of the Tyndall Centre who says we need something more like 10% cuts a year, or James Hansen who heads the climate research effort at NASA who says that two degrees of warming is too dangerous.