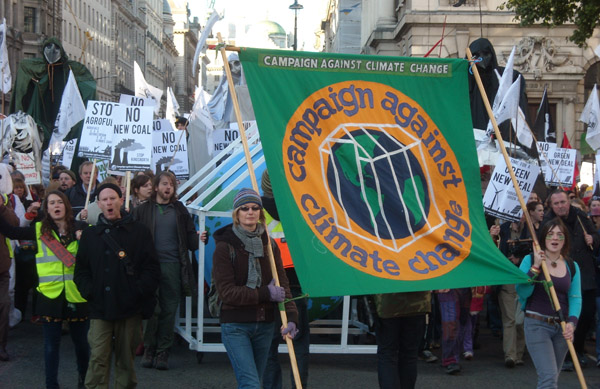 The National Climate March 2008 filled the streets of London again - thanks to everyone who made it another great success!
This time thousands marched on Parliament to demand action from the UK government on climate change.

Protestors carried banners and placards saying 'No New Coal', 'No Third Runway', 'Stop Agrofuels' and 'Time for a Green New Deal'.
Protestors were also demanding meaningful action on climate from world leaders and their representatives at the Poznan Climate Talks. The demonstration was part of a Global Day of Action in which around 70 countries were involved.

The marchers gathered at Grosvenor Square on a crisp and sunny winters day. A colourful and noisy throng brought their message through the streets of London to the very doorstep of government. Protestors displayed the kind of colourful creativity in costumes, banners and assorted props, that we have come to expect from climate marches. A notable new addition this year were the '4 horsemen of the apocalypse'. Disciplined chanting at the front of the march was followed up by assorted samba beats and other sounds further down the long trail of demonstrators.

Hundreds of cyclists, meanwhile, started the day early, gathering at Lincolns Inn Fields and progressing via the offices of Greenergy for an agrofuels protest organised by Biofuelwatch, the offices of EON for a protest against New Coal, and finally the Department of Transport to call for sustainable transport. They joined the marchers in Grosvenor Square just ten minutes before they started off.

In Parliament Square speakers included Nick Clegg, leader of the Liberal Democrats, who promised that his party would not neglect the need to takle climate change in the face of the global recession. Caroline Lucas, leader of the Green Party, spoke with her usual eloquence on the need for a New Green Deal, while John McDonnel, the Labour MP whose constituency includes Heathrow, spoke passionately about the building alliance between climate campaigners and his constituents who were resisting Heathrow's expansion. Other speakers included Kirsty Wright from the World Development Movement speaking on 'No New Coal', Almuth Ernsting from Biofuelwatch on the damage caused by agrofuels, Jonathan Neal from CCC on a Green New Deal, Mark Dowd from Operation Noah, Muzammal Hussain from the London Islamic Network for the Environment, Korshed Alam an activist from Bangladesh, Mel from the Climate Camp, Matthew Williams from the UK Youth Climate Coalition, and finally Phil Thornhill, the National Coordinator of CCC, to wind up the speches. Meanwhile Nick Hutton, CCC Treasurer gave an impassioned appeal for cash (or better standing orders)- the CCC can't continue the work it does without it - and everyone was warmed up by some fantastic tunes from from 'Seize the Day'.

A letter was handed in to Downing Street by Jonathan Essex, Christine Taylor, Ruth, Helen, Sophie and Thomas Jarman. See the letter here.

The Climate March on Parliament had four main themes -
1) NO to a 3rd runway at Heathrow and the runaway expansion in aviation expansion.
2) NO new coal - no new coal-fired power stations as planned at eg Kingsnorth in Kent
3) NO to the expansion of agrofuels - with negative impacts on forests, the climate and world food supply.
4) YES to a renewable energy revolution and green jobs - a "Green new Deal"

The Climate March also marked the Saturday midway through the UN Climate Talks in Poznan, Poland and we made our demands on the UK government in solidarity with the world's poorest and most vulnerable communities that will suffer worst and most immediately from climate change caused overwhelmingly by the rich long-industrialised countries.