"Emergency" budget is another shameless attack on clean energy

It took a while for all the implications of George Osborne's "Emergency" budget to sink in, perhaps a couple of hours until Twitter started buzzing. "We will remove the out-dated Climate Change Levy exemption for renewable electricity." So renewable energy generators, already hit by other government policies, will now have to pay out more in tax: £450 million lost to the Treasury in 2015/16, rising to £910 million in 2020/21. That’s £3.9 billion over the next six years.

As the name of the tax, the Climate Change Levy, implies, it was created to encourage clean energy generation, a carbon tax more or less, so extending it to renewables is bizarre. However, there is now no need to rename it. By hobbling renewable energy development it is now a levy to encourage climate change.

In Osborne's topsy-turvy world, this new tax on clean energy will be used to fund tax breaks for fossil fuels announced in the previous budget,  worth £1.3 billion over the next five years: "The large reductions in tax on North Sea oil and gas I announced in March are going ahead, and today we broaden the types of investment that qualify for allowances." These are of course on top of previous tax breaks worth up to £2.7 billion.

The final kick in the teeth for climate action was a reshaping of Vehicle Excise Duty. After the first year, rates for new vehicles would be set at a standard rate unless their CO2 emissions were zero. So owners of efficient vehicles get a tax rise, owners of the most polluting cars get a big tax cut, and to round it off, the income will be ring-fenced for spending on roads. 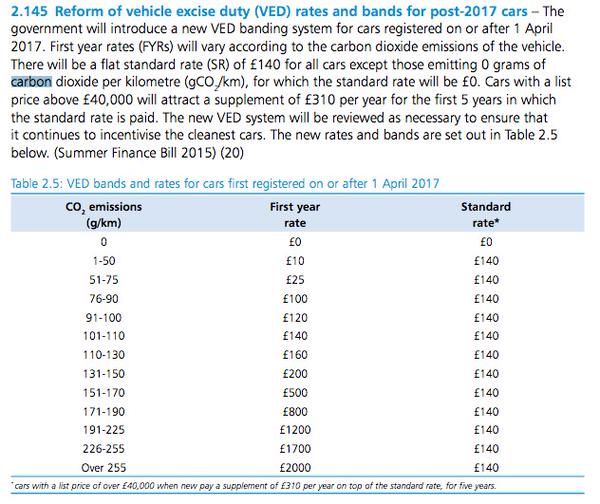