ICEBERG AT THE LIB DEM CONFERENCE

Taking the "Arctic Wake up Call" to the Lib Dems 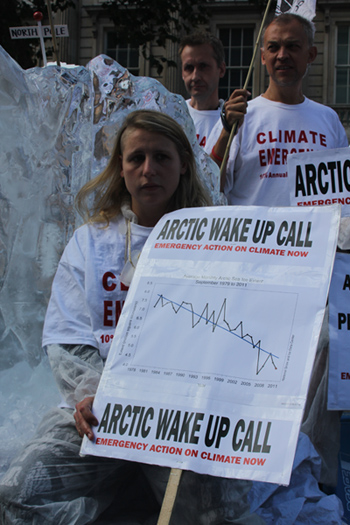 We delivered an "Arctic wake-up call" in the form of  a metre high iceberg to the Lib Dem conference in Brighton, to remind them  of the urgency of standing up to the Tories over climate change.

We were outside the Brighton Centre on King's Road, on the seafront (see map)- with the iceberg -  from around 9.00 am till early evening (around 7.00 pm). The weather was foul and there was much standing around in the wind and the rain (everything got soaked !) but that didnt stop us at all from delivering our message to the Lib Dem delegates (who had to be there, whatever the weather) and aorund 600 "Arctic Meltdown" leafelts were handed out as well as some other literature. Vince Cable's PA has our "Climate Emergency" booklet - we wonder whether whether he will read it ?!?!

The iceberg cost money. Thank you everyone who donated generously to the "Sponsor an Icberg" appeal. We raised enough to go ahead and have got pretty close to covering the cost of the iceberg but its not too late to add your own contribution, if you would like to,   here.

On Sunday 26th August -  the day after the news broke that the record minimum for Arctic sea ice had been broken -  we took our 'Arctic Wake-up Call" (and an iceberg) to Downing Street ....See more about that and more about the arctic ice below ....

The day after the news appeared on the NSIDC website - that the minimum Arctic sea ice record had been broken - CCC activists were outside Downing Street with an "Arctic Wake up Call", demanding emergency action on climate now - from David Cameron and the government.

They went with a metre high block of ice carved to the shape of a (melting) iceberg. And with placards and graphs showing the message.

Despite the hyper-short notice maybe 30 odd gathered to deliver their urgent message: Cameron must not ignore  the very clear message that Nature is giving him.

Couldn't make the demo in London? Then send an email to David Cameron telling him we need to ramp up our response to the unfolding Climate Emergency.....  you can find a sample letter to cut and paste into the No.10 webform here.

Peter Wadhams, Professor of Ocean Physics and Head of the Polar Oceans Physics Group at Cambridge University  supported the Downing Street ‘Wake Up Call’ and contributed this quote to our press release

“For 40 years I have been measuring sea ice thickness in the Arctic from UK submarines. I first detected substantial thinning in 1990, and since the most recent submarine voyage in 2007 I have been warning that the combination of sea ice retreat and a massive amount of thinning will lead to the disappearance of the summer sea ice by as early as 2015. Despite the fact that this is a simple extrapolation of a clear and measured trend I have been vilified by scientific colleagues for making such a seemingly radical prediction. I am pleased to see these same colleagues now jumping on the bandwagon and supporting my prediction.
What is happening is that the Arctic is warming up 3-4 times as fast as the rest of the world. The sea ice grows less thick in winter, and me 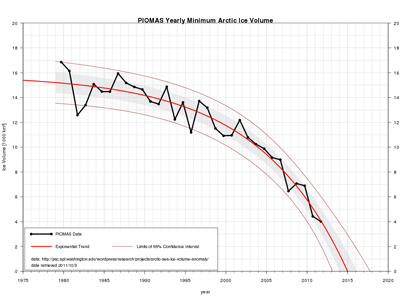 lts more in summer, such that the entire ice cover is now on the point of collapse. The extra open water already created by the retreating ice allows bigger waves to be generated by storms, which are sweeping away the surviving ice. It is truly the case that it will be all gone by 2015. The consequences are enormous - a huge boost to global warming from two sources, the reduction in global albedo caused by the replacement of ice by open water, and an acceleration of methane release into the atmosphere as the warm open water causes seabed permafrost to melt.”[click ice volume graph above to enlarge]
Arctic Sea Ice is crashing. The NSIDC figures showed that the record for the minimum arctic sea ice extent was broken on Friday 24th August.

When you think that the actual minimum for this season is unlikely to be reached till mid September or possibly later then you begin to realise how much of a bombshell this really is - we could see the all-time low record not just broken this year but obliterated....!!! 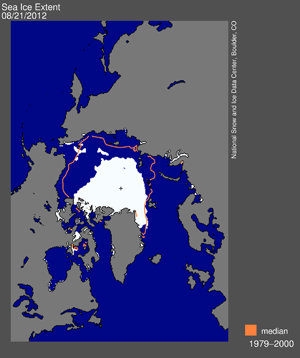 This means that an ice free arctic ocean could very rapidly become a reality and the consequences could be profound....for the effect that the warming arctic is already having on global weather patterns - with devestating impact on global food supplies - see Phil's blog here. For the potentially apocalyptic impact of a massive methane release triggered by an ice free and therefore warmer arctic see, for instance here and see the "Arctic Methane Emergency Group"'s take on it here.

However you look at it this is dramatic visible evidence of our rapidly warming planet - we can't let it be ignored yet again....

The actual figures are available from ftp://sidads.colorado.edu/DATASETS/NOAA/G02135/north/daily/data/NH_seaice_extent_nrt.csv  (the record low was 4.13 million square km)