At the Treasury, 1 Horse Guards Road

Protestors gathered outside the treasury to demand genuine renewables, not a second dash for gas.  In line with this they demanded that the decarbonisation of the electricity supply by 2030 be written into the forthcoming Energy Bill (as recommended by the Committe on Climate Change).  George Osborne was identified as currently the biggest obstacle to progress on tackling climate change in the UK - if he and the Tory Right get their way on a second dash for gas it will render the Climate Act effectively dead in the water.

For more background to the demo see below.....

Latest - The Government announced today that levels of onshore wind subsidy will be cut only by 10%, not the 25% demanded by the Treasury. But they state that gas is expected to play a 'key role'. A 'dash for gas' has not been ruled out, with £500 million new subsidy for gas fields announced.

In order to meet the government's legally binding emissions targets, it is essential that the Energy Bill contains a commitment to decarbonise the electricity sector by 2030. Without this, the way is open for unabated gas to take over, and the Climate Change Act will effectively be left dead in the water.

A major battle lies ahead, between Osborne and the right wing of the Tory party on the one hand and those seeking to fight climate change on the other. Time to say NO to a fossil fuel future!

A leaked letter (see Financial Times article here - you need to register but it's free) revealed that  “George Osborne had offered to drop his demands for tougher cuts to onshore wind subsidies if the Liberal Democrats backed down over “inflexible” targets for Britain’s shift away from fossil fuels” – in other words if they agreed to effectively ignore the targets enshrined in the Climate Act, thereby rendering it effectively dead.

The Commons energy committee has recommended that the forthcoming Energy Bill set a target for largely decarbonising the electricity supply by 2030. The Committee on Climate Change has said that this is effectively the only way that the UK can fulfil its statutory carbon reduction commitments. Osborne however has been pushing for unabated gas and therefore the effective abandonment of meaningful climate targets.

Osborne has been allying himself with the Tory right against wind farms and using this to pressurise the Lib Dems into accepting a climb-down from the projected decarbonisation of electricity by 2030. Ed Davey the Lib-Dem Energy Secretary had already accepted a 10% cut in the subsidies for wind energy but backbench Tories were pushing for 25% cuts to the subsidies for onshore wind.

So Osborne and the Tory right are effectively pushing for a second dash for gas in place of a determined attempt to move to renewable energy – and in the process they are destroying investor confidence in what was a booming sector. Even Tim Yeo – senior Tory and former minister – has accused Osborne of wrecking the government’s green energy plans to placate backbench Tories. See Guardian article here and further Guardian blog here.

Osborne’s attack on the green policies (already woefully inadequate in the light of the climate science) of the Coalition has been ramping up over several months and has now reached a peak which clearly threatens to annihilate the ground-breaking Climate Act, as a viable means of keeping to (even inadequate) carbon reduction targets. 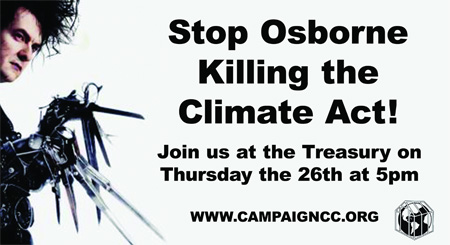 Weight:
4
‹ Petition to the new BBC Director General on climate change coverage up US Election: Demo against fossil fuel money in US politics ›