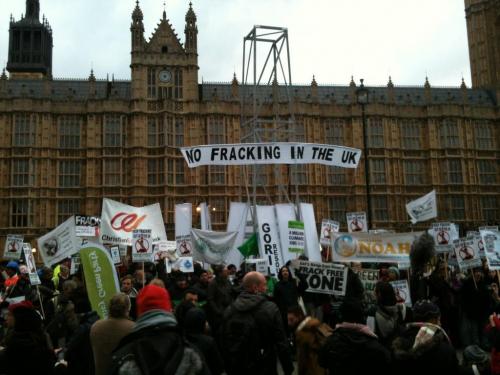 Thank you to everyone who turned out on one of the coldest days this year. With our 7.2m fracking rig, we took a clear message to Parliament - "No Fracking in the UK", a message backed up by other actions around the country, and one that was picked up by the BBC (see here and here) amongst others. Not only that but there could hardly have been a more critical moment to stage a conspicuous show of opposition to the the government's unfolding plans for an expansion of fracking and a new dash for gas.

The day started at the US embassy where demonstators demanded that Obama end his self-imposed climate silence and that the US stop blocking progess at international Climate Talks, like those currently in progress at Doha in Qatar (where there was also a march on this Global Day of Action on climate:see here). CCC Coordinator Phil Thornhill set the scene by referencing this year's precipitate crash in arctic sea ice before moving on to the role of the US but 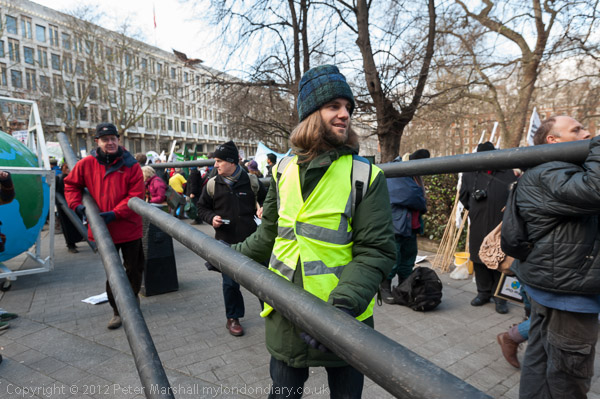 the main highlight of this first part of the days activities was the building of a "Grosvenor Square Keystone pipeline" between the US and Canadian embassies (see video here) in solidarity with activists in North America resisting the export of polluting tar sand oil via the real Keystone XL Pipeline from Canada to the US. Jess Worth from the UK Tar Sands Network explained (see video here) the magnitude of the threat to the climate from the Tar Sands and described the heroic and - at this point - inspiringly effective resistance being made to them by North American activists. 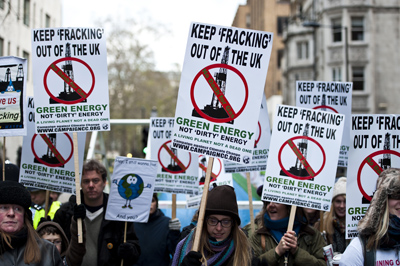 Next came the mobile part of the day's event as demonstators marched, chanting and waving "No Fracking in the UK" placards, via Picadilly Circus and Trafalgar Square to parliament (see video here). After a last barrage of chants for "No fracking in the UK" and "Green Energy Now" Eve Macnamara from REAF ("Ribble Estuary against Fracking") described the ongoing resistance from local residents' groups like her own to the test drilling and planning applications already being pursued by the fracking companies. Symbolising that resistance the "fracking rig" was then hauled up on a rope to its full 7.2 meters, to cheers from the crowd (see video here).

There followed a speech from John McDonnel MP (Labour, Hayes and Harlngton) which included a rousing call to action for a movement against fracking and finally a speech from Natalie Bennett, the new leader of the Green Party, outlining the benefits of Green Energy.

All in all an inspiring day and a critical milestone in the building resistance to the Government's dash for gas and the anti-environmental backlash now coming from the Tory Right.

This year has seen the passing of an awesome milestone in the accelerating escalation of the climate crisis - the record shattering disapearance summertime arctic sea ice, which has now been predicted to disappear completely by 2015 (see further here and here). Something that was not predicted to happen till the end of the century is happening right now! But not only is climate change already altering the planet's basic geography, the rapid changes in the Arctic have been linked to recent extreme weather events that have destroyed crops and sent food prices spiraling, hitting the world's poorest hardest.

Yet even as the world is poised on the brink of a tragedy of unimaginable scale, none of our leaders seems to be so much as blinking an eyelid in response. Worse than that humanity is engaged in a madcap suicidal dash to unearth  yet more of what caused the problem in the first place - fossil fuels. Even as some fossil fuels are becoming more expensive to extract, new types - often more carbon intensive - of fossil fuels are being discovered and exploited. We believe it's time to "get fracktious" about the criminal insanity of the way we are responding to probably the biggest threat humanity has ever faced.