Protestors spilling out of the end of Rochester high street

Hundreds gathered in Rochester for a rally in the high street followed by a 7 mile march to Kingsnorth power station, to demand NO NEW COAL - and no new coal-fired power station at Kingsnorth. This was a great showpiece event to help launch the Camp for Climate Action and generally emphasise the critical importance of the decision over Kingsnorth and the need to stop and reverse the expansion of coal-burning for power around the world. The march was joined by the Climate Camp "caravan" which had spent the previous week making its way from Heathrow, the site of last year's climate camp. 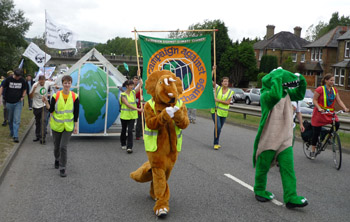 The day began with a series of short but punchy speeches delivered from a soapbox, near the Blue Boar lane car park, on Rochester High Street. There was a great mix of 'national' and local speakers - making for a genuinely varied perspective on the issue. Then the cavalcade gathered to march down Rochester High street led by 2 "dinosaurs", the (7 foot cubed) globe-in-a-greenhouse, CCC banner, Caravan banner, Caravan polar bear, all manner of cycle-drawn paraphernalia and an endless parade of dinosaurs...(well, dinosaur posters..)... emphasising the theme that unabated coal-burning power stations should belong to prehistory ! 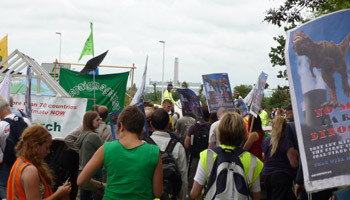 The march numbers held up well over the 7 mile route - we even gained a few as well as losing some. There was a quite surprising amount of sympathetic support from local people - though also we have to report some shouted abuse from the head-in-sand brigade whose courage seemed to be mainly of the dutch variety given that they seemed to be concentrated at certain drinking establishments. All the while the distant looming sillhouette of the power station grew closer untill we finally gathered together at one of its subsidiary gates - under the watchful eyes of a very considerable police presence. There were brief final speches and notices before we dispersed - many going 'en masse' with the 'caravan' to the Climate Camp - others being shuttled back to Rochester station. At this point the weather broke ..but reinforced our appreciation for the clement weather up till now...

The media coverage for the march was excellent - with some TV, lots of radio, before during & after the march, pictures in the Metro, Financial times, London Paper, lots of lcoal papers etc...etc...

During the following week the Climate Camp made a very great splash in the media, of course, very succesfully highlighting the issue - the insanity of building new coal-fired power stations in the midst of the climate crisis. The CCC had a stall in camp advertsing the December National climate March and Global Day of Action and many CCC members were involved with the camp. The situation with the police was especially fraught at this year's camp (cue endless stories, personal anecdotes....etc..) but a mixture of determination and restraint saw the camp through, sticking to its goal of highlighting the issue through Direct Action. Many of Sunday's marchers found themselves back at the gates of the power station just under a week later on the Saturday Climate Camp Day of Action.

Humorous Aside: Amongst the dangerous items seized by the police were 2 dinosaur costumes !!! (presumably under the little known ordinance of 1384, article 3 para 2 "wilfully causing alarm by impersonating a prehistoric animal etc.." or the Statute of Silly Costumes 1493, "conspiracy to masquerade as an evolutionary anachronism...etc etc..").