Across North American, First Nations and indigenous peoples have stood in the frontline against fossil fuel development, protecting land, water and climate. The Wet'suwet'en of British Columbia have been blocking TransCanada construction of a fracked gas pipeline across their unceded territories. On Monday 7th January, heavily armed Royal Canadian Mounted Police breached the Gidimt’en clan checkpoint set up to keep pipeline workers out of protected territory, using violence and arresting 14 protectors. TransCanada Corporation are planning to build the $4.7 billion Coastal GasLink mega pipeline to export fracked gas, but hereditary leaders of all five clans of the Wet'suwet'en maintain they have no right to do so on their lands without free, prior and informed consent.

The Unist’ot’en camp and healing centre have been on that site since 2010, originally in resistance to the Enbridge tar sands pipeline. Following the force used on peaceful protesters at the checkpoint,  the Wet'suwet'en Hereditary Chiefs have agreed to open the gates to protect their people from injury or death. They remain determined that the pipeline will not be built and that their land rights will be confirmed in Canada's courts. Full statement

Over 60 solidarity protests have taken place in Canada and around the world (see Facebook for videos and pictures). Below, we took the message of solidarity to the Canadian High Commission, that the world is watching. 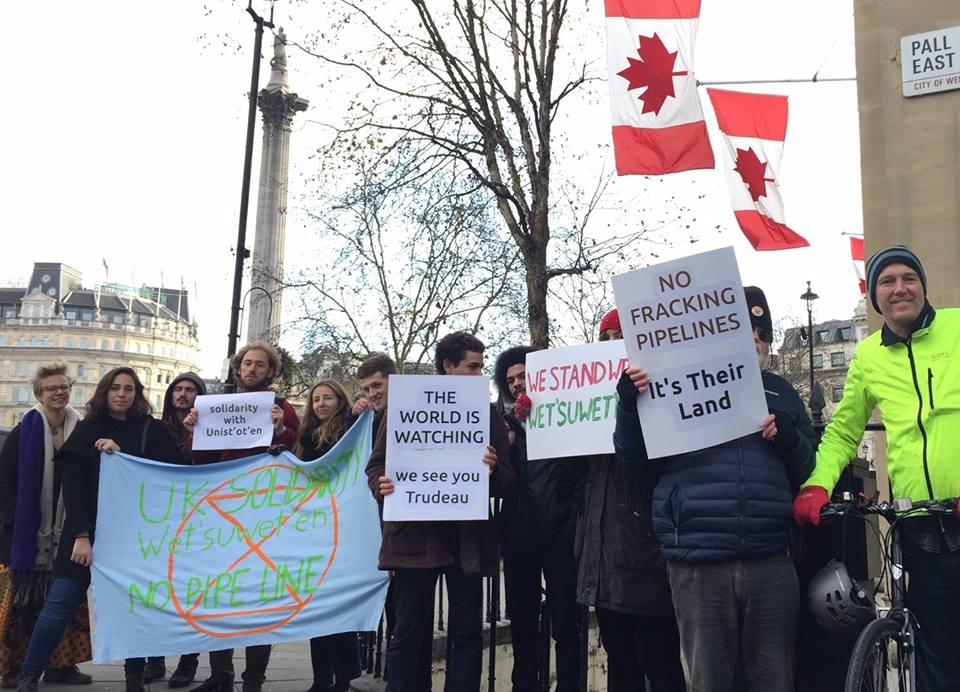 Check the Unist'ot'en Camp website for updates and how you can support.