Gangsta Party outside the U.S. Embassy 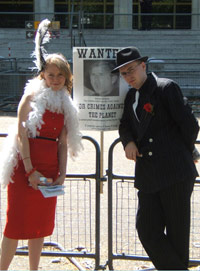 Continuing on from the last day of action the London group of the Campaign against Climate Change returned to the U.S. Embassy to remind the people inside that neither the issue nor the protests will stop until they stop acting like Gagsters and start taking action that is needed.

The area just in front of the Embassy was of limits to us and any possibility of moving the barriers was out of the question due to our lack of "barrier moving training".

The trade mark Greenhouse was assembled in record time with no complications and with a variety of people in the appropriate dress it was time to get the party underway.

Tea was ready available along with the usual array of postcards, leaflets, badges and sheets for names and email address of supporters.

Also with the aid of 30's music and a wide range of live performers with a substantial sound setup the entertainment factor far exceeded even our optimistic expectations.

The Party was hosted by The Rub (Revolutionation) with guests includin Sarah Bear, MC Excentral Tempest (Bones of Contention) and the Dreadful Jasper (Synergy). 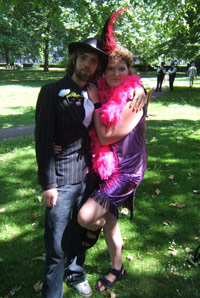 Thankfully the weather was one our side for the whole day and offer of a free cup of tea was too tempting an offer for some to refuse.

We had support from a wide spectrum of people from Americans, Japanese, British and even a couple of local police. More names added to the even increasing list of supporters understandable eager for next months party.

The theme of the next party has not been 100% decided but we will once again hope to build on our success and come up with even more imaginative and entertaining was to get our point across that a problem that will effect every one will need involvement from everyone.

Thanks once again to all the supporters, performers, helpers and the local law enforcement (for their patience.)

See you all next time.

Weight:
0
‹ G ATE my Planet Party outside the U.S. Embassy up Climate Conference 2006 ›