This was a huge success! Thanks to everyone who took part and helped make it happen.

December 3rd 2005 was the Saturday midway through the "MOP" (First "Meeting of Parties" to the Kyoto Protocol) Climate Talks in Montreal, 28th November-9th December. The London Demo was part of the International Day of Climate Protest with climate demos all around the world from Montreal to Japan. For photos click here. 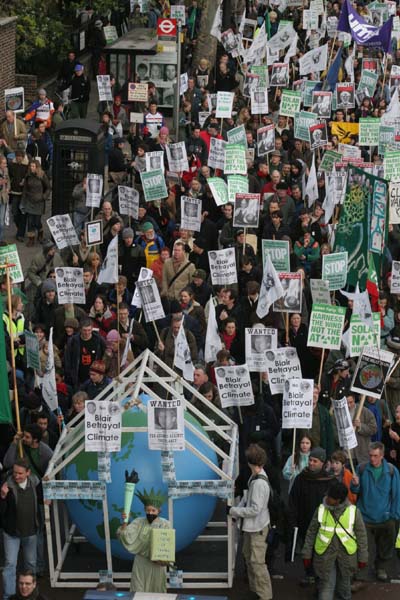 We helped to create a global wave of protest to press for the urgent action we need to prevent the catastrophic destabilisation of global climate!

10,000 is the figure given by the 'Independent on Sunday' for the number of marchers on what was a groundbreaking event for climate campaigning in the UK.

The day started with 60 or so cyclists setting off from the Thames Barrier, pennants flying, but this number soon swelled to 200 or so. Meanwhile Britain's biggest ever climate demo - by a long chalk - was massing in Lincoln's Inn Fields. The long snake of protestors finally set off past an impromptu anti-ExxonMobil protest by several tiger-suited demonstrators lurking in the dooorway of the Esso London offices - and then the Australian embassy (John Howard's government is partner-in-crime to the US in not ratifying Kyoto), onto the embankment. The marchers braved a brief torrential downpour as they proceeded up Whitehall and a letter was handed in to Number 10, by Honorary CCC President George Monbiot and others - including 10 and 4 year old Ross and Ursula Moncrieff (on behalf of future generations).

The march (quite a long one!) terminated at Grosvenor Square in front of the US embassy where demonstrators were greeted with protest songs from David Rovics. Next National coordinator Phil Thornhill said a few words, harking back to his protest of 'one' five years ago, and then Michael Meacher MP kicked off the speeches, telling Tony Blair not to 'kow tow to Bush' on climate. The impressive list of speakers included Caroline Lucas, Green MEP, Benedict Southworth, Director of the World Development Movement, Elaine Graham-Leigh from RESPECT, Fazlun Khalid, Director of the Islamic Foundation for Ecology and the Environmental Sciences, Ruth Jarman for Christian Ecology Link (who held a child in one hand and a polar bear in the other!), Norman Baker MP (Environment shadow for the Lib Dems), a speaker from 'Rising Tide', Nick Rau from Friends of the Earth, Jonathan Neale on behalf of Globalise Resistance, Peter Bunyard, Scientific editor from the Ecologist (just back from the Amazon) and finally CCC honorary president George Monbiot - who declared that we actually need 90% cuts in global emissions by 2030.

Meanwhile around 400 protestors took to the streets in Edinburgh. See more, here.

And demonstrations calling for urgent action on climate change were taking off, all round the world! Before the cyclists had even set off from the Thames Barrier we heard the news that 3,500 had demonstrated in Sydney with around 10,000 all round Australia. Later there were 2,000 in Istanbul and 1,000 each in two other Turkish ciites. Finally in the 'centre-piece' protest in Montreal a reported 35,000 protestors converged on the Climate Talks conference centre. We've heard, too, of 500 in Helsinki (700 all round Finland), 400 in Mexico city, 200 at 2 separate locations in Greece, maybe 200 in Bulgaria, 100 in Romania, 200 in Seoul, 120 in Ekaterinburg in Russia, 75 in Zagreb Croatia ...small numbers, maybe, but many of these are places seeing their first ever demonstration on climate change ......and we've had pictures, too, of the march in Dhaka, Bangladesh, a country gravely threatened by climate change, see more here.

For the Edinburgh demo see here and here.

For pictures from the international demonstrations on the same day see here.