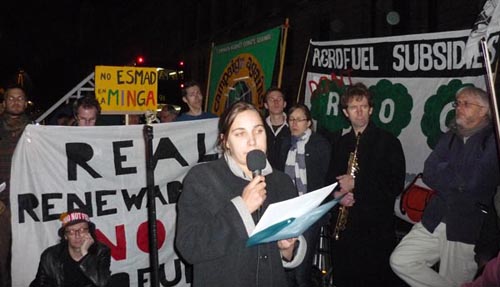 Called by Campaign against Climate Change, Biofuelwatch and Food not Fuel

This was a lively demonstration with a great atmosphere! Good speeches from  Kenneth Richter from Friends of the Earth, Rupert Read from the Green Party, Maryla Hart from ‘Food not Fuel’, Phil Thornhill from the ‘Campaign against Climate Change’, Amancay Colque from Coordinadora Latinoamericana. and also John Stewart from HACAN who chipped in with a few words about agrofuels as the 'long game' of the aviation industry. Also great music from, Pete, Mark et al!

Half way through there was a great moment when the Latin American contingent arrived on the last stop of their long day of actions in solidarity with indigenous people on this 'Day of Protecting Mother Earth'.

Photos from the evening are here. Earlier in the day there was a photo-op at the same place, the photos from the shoot are here. Videos are on a playlist on our YouTube channel.

The government is using renewable energy subsidies (Renewable Obligations Certificates – or ROCs) to fund power stations that use agrofuels.

While the UK’s only significant wind turbine factory has just been closed up to twice as much subsidy is going to producing power from agrofuels than from onshore wind.
Agrofuels - biofuels procuced using intensive agriculture - are a a major driver of deforestation, in turn, a major cause of climate change. Agrofuels from palm oil in particular are accelerating the burning of Indonesian forests and underlying peat bogs with truly astronomical emissions as a result.
In Italy and Germany there are already large numbers of agrofuel power plants and almost all of them use palm oil because it is by far the cheapest feedstock. It is pretty certain that agrofuel power plants in the UK will follow the same economic logic.
Burning palm oil is probably the most environmentally damaging and climate negative way to produce power and yet this seems to be what the government wants to subsidise!
See more on the Biofuels page here.
Weight:
30
‹ Great Climate Swoop up Vestas National Day of Action ›