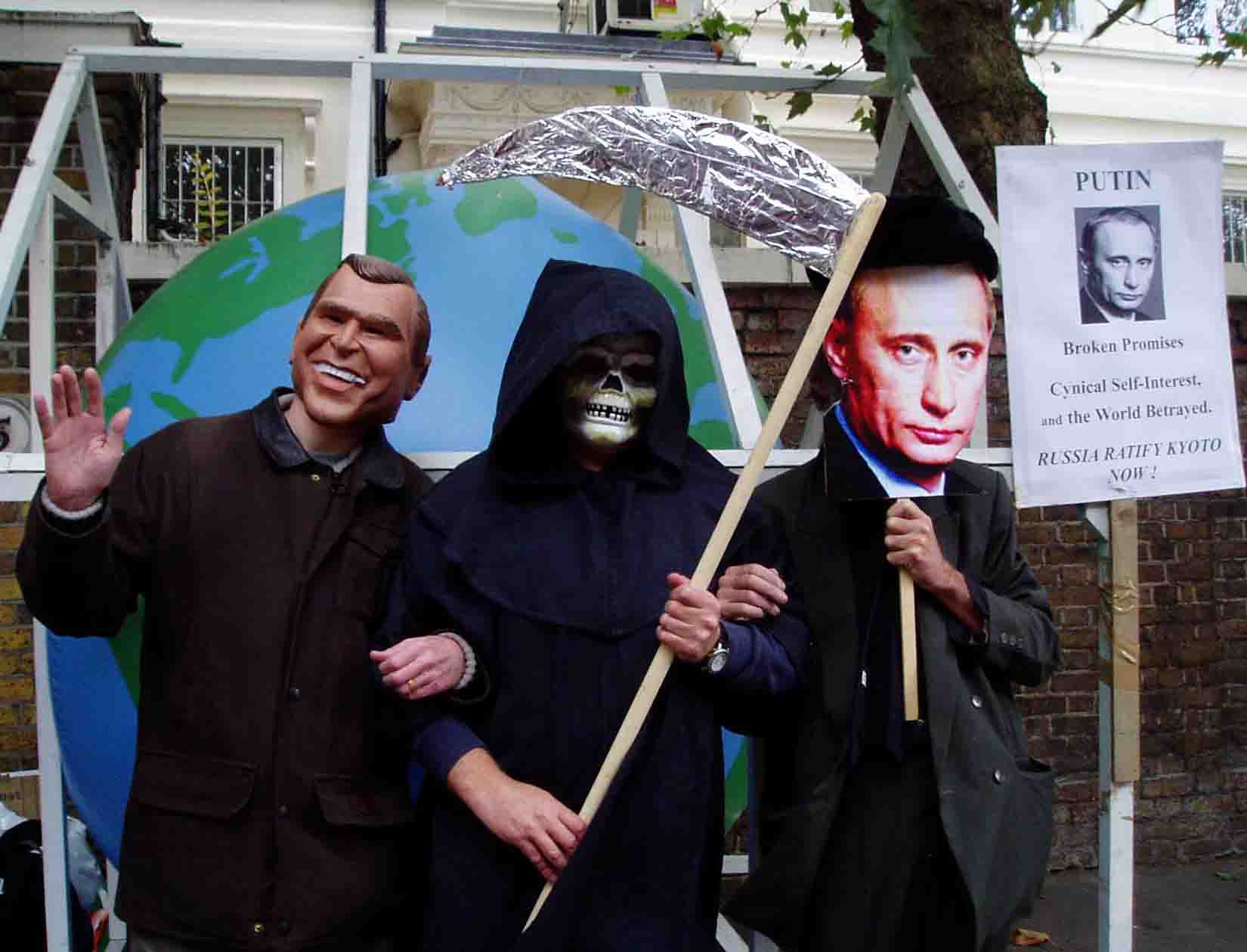 At a climate conference in Moscow Putin not only failed to set a timetable for ratification of Kyoto (as expected) but indicated a distinctly negative attitude towards it. This is desperately serious because Russia is needed for the Kyoto Climate treaty to become operative. The treaty needs countries that together can account for 55% of global emissions, to ratify before it can become operative. Without the US only Russia can make up the full 55%....no other country in addition to Russia is now needed, but no other country than Russia can make upthe full 55%. So their non-ratification threatens to derail the whole Kyoto process, the world's only attempt so far to initiate a desperately needed limit on global emissions of climate-destabilising 'greenhouse gases' (mainly CO2).

As our Press release (approved by Aubrey Meyer of the Global Commons Institute!) read : "In breaking his promise to ratify Kyoto Putin has demonstrated that narrow, old-fashioned, national self-interest... or the interests of the gangster-oligarchs who now run Russia.... dominate his policy. But he will find out that unless he and the world discover a new sense of global environmental responsibility and proceed apace with the Kyoto process then any advantage he seems to gain by not ratifying Kyoto will be rapidly swept aside when the full terrifying impacts of uncontrolled and accellerating climate change become apparent. The idea that Russia will benefit from higher temperatures is not only supremely selfish and cynical given that other countries, would inevitably suffer from drought and famine, as a result of a rise in global temperature, but also laughably naive, to think we could stop the process of climate change just where we want to and not see it spiral destructively out of control. Like George W Bush, Putin has a mind too small to deal with the biggest challenge the world faces today: the catastrophic destabalisation of global climate"

We made sure there was some kind of reaction to Putin's fateful decsion - a depressing and desperately serious development - and put our message across at the Russian embassy. We had our Globe-in-a-Greenhouse as usual, that very loud megaphone to blare out the message, and a "Putin", now arm-in-arm with fellow 'small-mind', "Bush" and a 'Grim Reaper', who they have now, as it were, jointly invited to have a spree on planet earth....also a 'fire-lady' to ram home the 'global-over-warming' point.

Weight:
0
‹ "Burning Planet" march against Bush up Climate change is the real weapon of mass destruction ›