Climate change is the real weapon of mass destruction

We carried a giant 10 metre long, "chinese-dragon" style, "missile", carrying the message "Climate Change is the Real Weapon of Mass Destruction" to the Labour Party Conference on the day of its opening. We also took our 'globe-in-a-greenhouse', placards with the message etc... from Meyrick Park down to the Conference centre. Getting the "missile" ready in time at the gathering point in Meyrick park was quite a struggle, but Phil and John Ackers had been working on it from early in the morning, and then Barry Botley and a team from Shepway FOE added some finishing touches to make the thing carriable.... thanks also to Enid and New Forest FOE and Roger Eede from the local Green party. 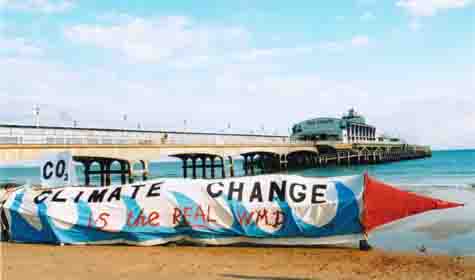 A weapon of mass destruction on Bournemouth beach

The missile progressed under police escort through Bournemouth centre to its 'target' at the Conference centre where Phil used a very effective megaphone to barrack the Labour Party and Tony Blair for spending more time looking for non-existent WMD in Iraq than they were doing anything (eg in particular exerting pressure on G W Bush) about the 'REAL' WMD, the real mega-threat to the future security of the planet, Climate Change. After this John Ackers had the bright idea of transferring the missile down to the beach where its presence was particularly striking and did attract at least one film-cameraman. Meanwhile Judith from Camden FOE, and Auriel from Merton FOE, and others, were busy handing out leaflets, something that was continued over the next few days by Phil (who stayed down in Bournemouth till Tuesday evening).

The leaflet included the full text of the Guardian article by Sir John Houghton (ex-chief of the Metereological office) which was the main inspiration for this action (in it he called Climate Change a 'WMD': to read his article click here).The strong simple message that the destabilisation of global climate threatens a global tragedy of almost unimaginable proportions and that much, much, more needs to be done about it, is one that must have resonance to any party that aspires to any kind of morality, conscience or sense of global responsibility...and is a message that needs delivering to people close to power, over and over again!

Weight:
0
‹ Putin: Broken promises, cynical self-interest, and the world betrayed up Feeling the heat? You ain't seen nothing yet! ›