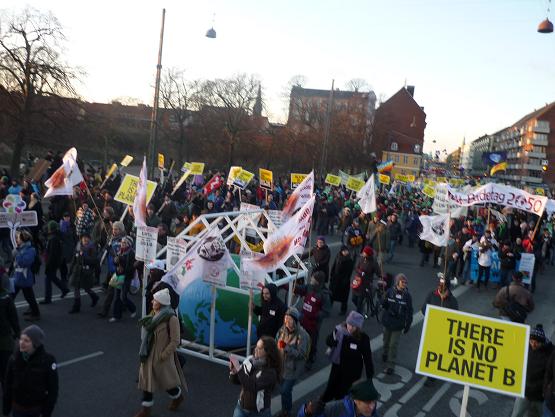 The Campaign against Climate Change was out 'on tour' wth our hallmark 'globe-in-a-greenhouse' and assorted flags and banners at the magnificent climate march in Copenhagen on 12th December, the Global Day of Action on climate on the Saturday midway through the climate talks.

The CCC co-organised the 'Euro-train'  that took 800 activists from Belgium, France and the UK to Copenhagen for the weekend of the 12th-13th. This was in collaboration with 'Climate et Justice Sociale'  from Belgium and 'Amis de la Terre'  from France. 133 activists from the UK went on the train, while CCC also organised a coach that took another 50 activists.

The Global Day of Action march in Copenhagen was a great success, with maybe around 100,000 taking part including sizeable contingents from many European countries and a broad diversity of people from all over the world. CCC enthusiasts joined the Friends of Earth 'Flood for Climate Justice' outside the venue of the 'Klima Forum' at 10.00 am and proceeded with the 'greenhouse'  to Christiansborg which rapidly filled up with demonstrators to hear speeches before the march left around 2.00 pm for the 6km march to the Bella centre (where the conference was being held), where there were more speeches and entertainment into the early evening.

Everyone was agreed it was a fantastic day - not to be missed - and a milestone in the building of  a global campaign against climate change.

See our photo gallery from the day here. We've also greated a Flickr group for others to share their photos from the march.