The Zero Carbon Britain Report – is this our blueprint for the future? 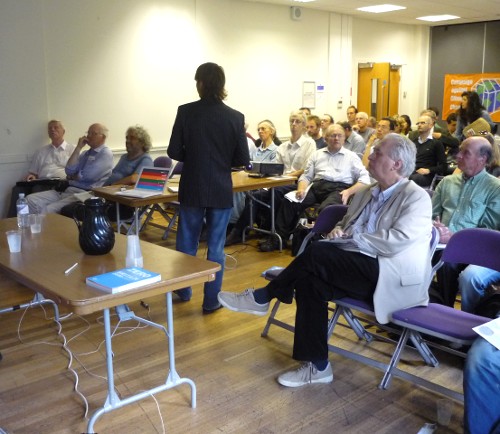 Peter Harper and Stephen Murphy from the Zero Carbon Britain team presented a compelling case for the report, with Peter explaining the land use section in  especial detail. They then answered answered a host of questions and comments from the floor in a lively discussion.

Topics covered (besides land use changes) included the intelligent use of energy, renewable energy generation, the infrastructure that we will need to develop, and positive effects on the economy. A comprehensive and radical approach could - given the necessary injection of  collective will from the public -   result in an actual increase in the quality of life as well as  being an effective way to prevent catastrophic climate change.

The second Zero Carbon Britain report was released in June this year and offers a radical blueprint for rapid de-carbonisation of the economy and the achievement of, essentially, a zero emissions society by 2030. This looks like just what we need to address the Climate Emergency, with real practical solutions and a realistic vision of how we can make deep and rapid emissions cuts in the UK. The presenters were keen to state that the report should serve as a framework to spark debates, proposals, and vision for the public to launch from.

AUDIO PODCASTS:
We recorded the main presentation and Q&A sessions and have uploaded them as MP3s, they're perfect for listening to on the train.
Main presentation (47mins, 43MB MP3).
Q&A session (55mins, 19MB MP3)

We've also uploaded the PowerPoint presentation of it so you can view the slides while watching the video:

To many the current government appears “green” in part because there is a lack of appreciation of the true scale of the climate crisis we need to address. We need a really coherent, radical, alternative with which to challenge the government’s painfully slow, faltering and piecemeal approach - and the Zero Carbon Britain Report looks like just that!

At the international level, meanwhile, the Copenhagen Talks demonstrated an impasse that is only likely to be overcome with a change in the politics and policies of key players at the national level. In the UK we can make our most powerful contribution by setting an example of how industrialised countries can put in place a plan for rapid decarbonisation of the economy – and 'Zero Carbon Britain'  looks just like that plan!

Weight:
22
‹ 'Why we should end domestic flights: aviation in the era of climate emergency" up Bolivian 'People's Climate Conference' - what does it mean for us? ›