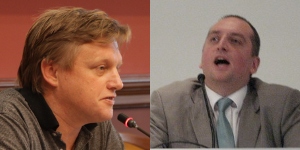 The question being debated was "Nuclear Power has no place in the fight against Climate Change: it is simply a diversion which leads us away from the real answer, renewable energy" as the SOAS lecture room heard from both sides of the argument. Stephen Tindale (ex Executive Director of Greenpeace but a recent convert to the case for nuclear) and Darren Johnson, Green Party chair of the London Assembly Environment Committee and career-long anti-nuclear campaigner both made convincing cases for expanding and curtailing nuclear power respectively.

First off, Stephen Tindale (pictured above left) described how he supports nuclear as a "bridging technology" - between the fossil fuel era and the ultimate goal of 100% renewable energy, and that nuclear is preferable to coal, which is what he predicts will replace nuclear power stations if they are shut as a result of the Fukushima disaster.

Next, Darren Johnson told the audience how opposition to nuclear power was at the core of his motivation on environmental issues, and that nuclear power was simply too dangerous and expensive to be practical in the fight against climate change, saying that renewables are the only option.

The evening was rounded off with questions from the floor covering topics from Combined Heat and Power to renewable gas and climate jobs. The debate was well attended and enjoyed by the audience with many more in the audience at the end of the evening than when the debate began.

Weight:
16
‹ No backtracking on climate! up Action on Climate Change is not "Red Tape" ›