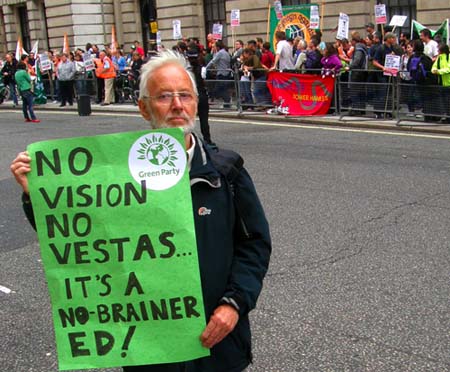 A second lively rally was held outside Ed Miliband's Department of Energy and Climate Change on the eve of the case to take out an injunction to evict the occupiers going to court in Newport on the Isle of Wight.  There was also a big demonstration of several hundreds outside Newport County Court itself at 10.00 am on the following Wednesday morning. See video here: https://www.youtube.com/watch?v=AdC3SOttYCw

The London Rally was called jointly by the Campaign against Climate Change and the RMT (National Union of Rail, Maritime and Transport Workers). Speakers at the Rally included Jean Lambert MEP (Green Party), Oliver New from the RMT,  Phil Thornhill from the Campaign agianst Climate Change, Drew Scanlon from the Vestas workers and  Dave Timms from Friends of the Earth.

Read and sign our open letter to Ed Miliband

Just when we need a huge expansion in renewable energy they are closing down the only wind turbine factory in the UK. The government has spent billions bailing out the banks, and £2.3 billion in loan guarantees to support the UK car industry – they can and should step in to save the infrastructure we are really going to need to save us from climate catastrophe.