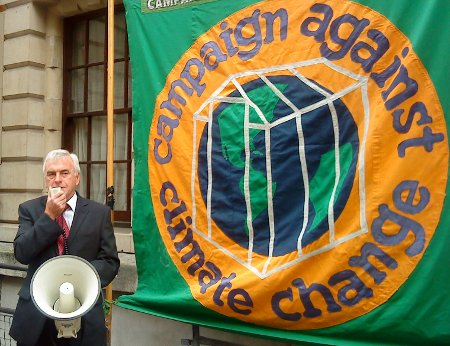 September 17th 2009 saw the second Vestas National Day of Action. The highlight of the day was a lively rally at Ed Miliband's Department of Energy and Climate Change (DECC) which demonstrated that the fight to save the Vestas wind turbine factory and for green jobs goes on. The rally was organised by the Campaign aginst Climate Change, working with Wandsworth and Battersea Trades Council, with a variety of groups attending including the RMT Union and Workers' Climate Action. A hundred or so activists ensured that this rally was bigger than that on the previous National Day of Action.

Videos of the speeches are in a YouTube playlist.

At the same place there was a lobby/photo-op earlier in the day, some photos are here.

Meanwhile other events took place around the UK:

Southampton
Demonstration at 5 o'clock on the 17th September at the Vestas Southampton factory. Followed by an open meeting at 7pm in the Dockers Club in Southampton.
Supported by RMT

Rotherham
Solidarity With The Vestas Workers public meeting
7pm at the Unity Centre, St Leonard's Road, Rotherham
Speaker from Vestas, plus Corus worker and striker from Tower Hamlets College UCU.
All welcome. Called by the Right to Work Campaign and Vestas support group.

London (Holborn)
A public meeting on the theme of Jobs, Education, Peace and Climate will be held at 7.30pm in the London Welsh Centre, 157 Gray’s Inn Road, London, WC1X 8UE.
Speakers include Mark Flower from Vestas, NUJ General Secretary Jeremy Dear and representatives from the UCU, NUT. Organised by the NUJ but backed by other unions.

Newcastle
March from the Newcastle Civic Centre through the city centre and rally outside the regional government offices, Gallowgate.
Assemble 4.30pm
Tel. Ed 07740 099479

Sheffield
Mass leafleting and holding a collection at Sheffield railway station from 4:30pm. Contact Rebecca on 07870 565 011 for more details.

For more info visit the Save Vestas blog.