Save People not Planes! 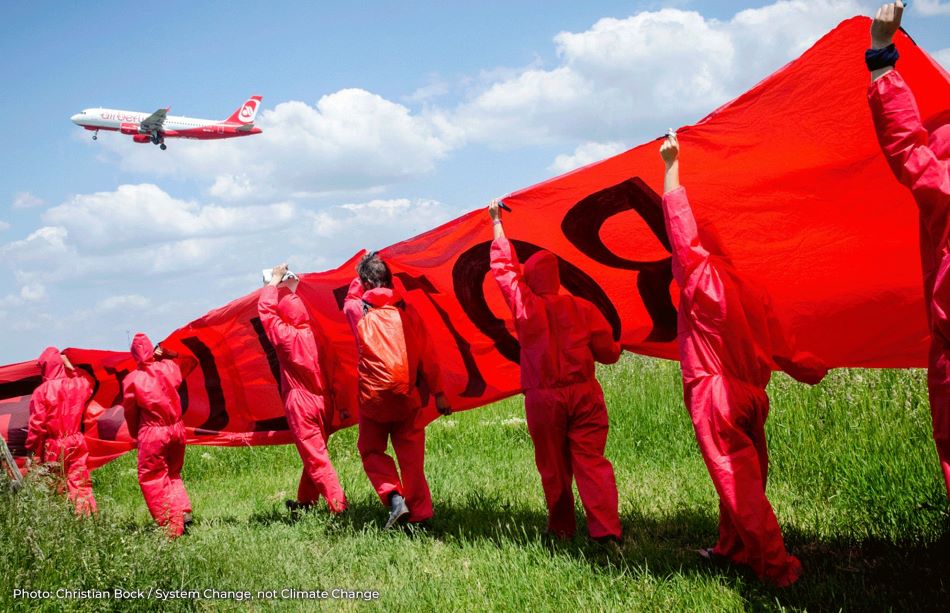 Campaign against Climate Change is among over 250 organisations supporting the following open letter to national governments.

You can support as an individual by signing the petition

In the middle of the ongoing Corona crisis, while the world struggles against the virus and countless workers are losing their incomes, the aviation industry is demanding huge and unconditional taxpayer-backed bailouts. Yet, in recent years, the industry strongly opposed any attempts to end its unfair tax exemptions and refused to contribute meaningfully to global emission reduction goals – which would require measures to significantly reduce the scale of aviation.

Not only is aviation already responsible for 5-8% of global climate impact, mostly caused by a wealthy minority of frequent flyers, but the sector also assumes that it can continue growing. Enormous profits were made in the last decades, off the backs of low-paid workers and to the detriment of the climate.

Workers affected by the current crisis need support, but we shouldn’t let the aviation industry get away with privatising profit while the public pays for its losses. Without addressing the structural problems that have left our societies and economies so vulnerable to crises like this one, we will be even more vulnerable to the next ones as inequalities between and within countries continue to grow and the ecological and climate emergencies worsen.

Bailouts must not allow the aviation sector to return to business as usual after Covid-19 has been defeated: any public money has to ensure that workers and the climate are put first.

Instead of bailing-out executives and shareholders, any financial assistance should make sure that workers are supported with strong labour and health protections, and a real living basic income during the crisis is provided for flight attendants, pilots, ground-staff, caterers and other impacted workers.

2. A Just Transition: Towards Climate-Safe Mobility

A condition for public support must be that the aviation industry aligns with a 1.5 °C trajectory. The emission reductions must be absolute and not employ dubious accounting mechanisms, such as offsets, nor rely on biofuels that harm the environment, food security and land rights. Since “green flying” is an illusion, air travel must be reduced. For a just recovery, democratic decision-making and public ownership are decisive. Governments must support a just transition: system-wide changes to transport networks, ensuring access to affordable alternatives (such as rail travel) and enabling workers to move away from fossil-fuel dependent jobs and into decent climate jobs.

It is not fair to save the aviation industry with taxpayers’ money if it pays almost no taxes, giving it an unfair advantage over lower emission modes of transport. Tax exemptions therefore must be stopped: airlines must be obliged to pay a tax on kerosene; and instead of Air Miles programmes which incentivise air travel, fair and progressive levies on frequent flying must be put in place.

It is important to use the current unintended pause in aviation for building a climate-safe transport sector and creating resilience for future crises.

Find out more about the Stay Grounded network