Hambach forest in Germany is 12,000 years old. But less than a tenth of it remains, and the remainder is under threat from ever expanding lignite coal mining. Lignite ('brown coal') is even more climate polluting than black coal, and the vast mines scar the landscape, swallowing up forests and villages.

Those who took up residence in the forest, and those who support them, are drawing a line for the forest and for our climate: no more - Hambi Bleibt (Hambi stays). But in their eagerness for profits, energy company RWE are not willing to wait for the outcome of a commission on quitting coal, they want protectors evicted to raze the forest. Police went in with disproportionate force, and were intent on eviction. Then on Wednesday 19 September, journalist, blogger and activist Steffen Horst Meyn, fell to his death from a suspension bridgewhile attempting to document an ongoing eviction action. You can read more about the circumstances here.

A few days later, the evictions continued. "We were never given time to mourn"

This tragedy has been felt internationally, raising awareness of the destruction Steffan was bearing witness to. A petition to the German government to block the forest clearance has reached over 750,000 signatures. Sign here.

The Campaign against Climate Change is deeply concerned about elements of the GMB motion on 'Just transition and energy workers' voice'.

Climate change is first and foremost a social justice issue. It will have consequences for every one of us, and hits the poorest first and hardest. The TUC therefore has the responsibility to reflect the voices of all its members in forming energy and climate policies. Future jobs in solar, wind and energy efficiency are crucial to our economy and these sectors have been badly affected by government cuts. The TUC must be a voice for them too, and call for urgent investment in climate jobs, not locking us into white elephant infrastructure such as new gas power stations. Energy unions of course have an important perspective but the suggestion that their views should be 'paramount and central' in determining TUC policy risks undermining strong climate action. 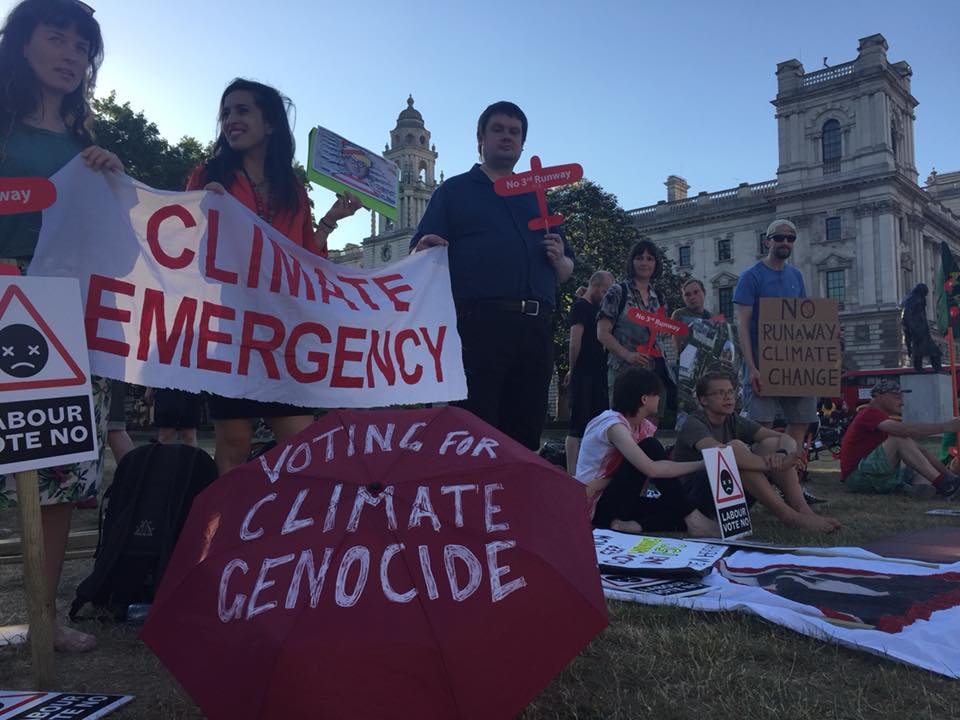 In 2008, the House of Commons voted on the Climate Change Act. It passed almost unanimously across all parties, with just six MPs voting against.

Ten years later, MPs have faced another significant vote: whether to increase aviation emissions by building a new runway at Heathrow. It was a clear choice between climate action or climate destruction. And MPs voted for the latter, 415 to 119 in favour.