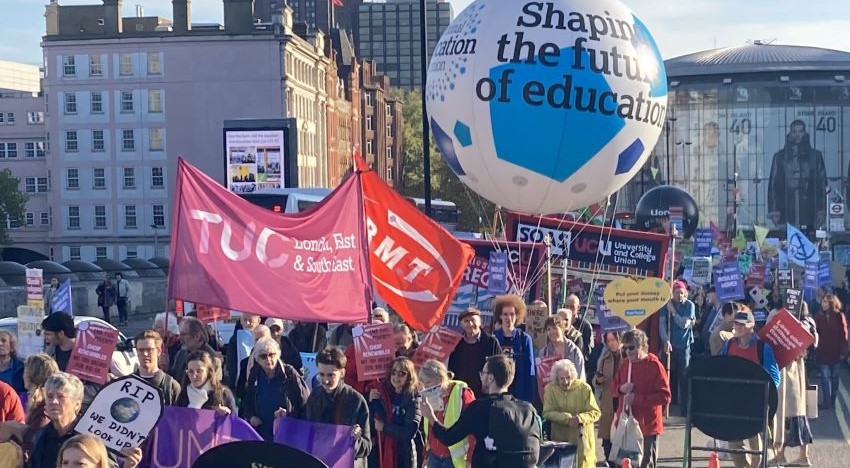 We want to build the widest possible coalition of forces to campaign for action on climate change. Involving trade unions is an important part of this.

The Campaign against Climate Change has an active trade union group, with national unions and local branches affiliated to us. There are regular online meetings which are open to anyone who wants to take part in campaigning. If you are a member of a union, you can find out here how local branches can affliliate to the Campaign against Climate Change.

Many climate campaigners wouldn't think of trade unions as natural partners for their campaigns, having seen 'jobs' and the 'environment' presented as mutually exclusive concerns. But increasingly these different parts of civil society are making common cause, challenging these myths and fighting together for a liveable planet and social justice. In 2019, trade unionists joined the student-led climate strike movement on two global days of action which brought out an estimated seven million around the world. Trade unions also mobilised widely in the UK for COP26 held in Glasgow in 2021.

Climate activists may be unsure about dealing with the official structures of the unions (even for those who may be members of unions themselves!), so the following advice has been written as a guide to help making those links a little bit easier.

Over a decade of austerity combined with the more recent cost of living crisis has led to a wave of strikes across public services. These are about pay and conditions, but also about maintaining public services. In some cases these services also play a key role in reducing emissions, for example public transport. They also make up the essential social infrastructure we all rely on

As well as calling on trade unionists to support their own campaigning on the climate crisis, climate activists have increasingly been showing solidarity with striking workers, by joining picket lines or collecting for strike funds.

We have a flyer about links between the right to strike and climate campaigning which you can download here or request copies.

Trades councils often welcome guest speakers on subjects such as climate change campaigning and attending one of their meetings in that capacity would immediately put you in touch with representatives from a wide range of unions.

Most union branches would similarly welcome speakers from campaigns.  They often regard guest speakers as a way of making their meetings more interesting for members.  Don’t be afraid to phone up the branch secretary or chair, they will more than likely welcome your approach.

Keep it short – an introduction of about 10 minutes will usually suffice – and encourage both questions and contributions from those present.  Don’t dwell too much on the science – most active trade unionists will already be aware that climate change is happening and that it is potentially catastrophic – instead concentrate on what needs to be done about it.

Defending our rights to protest and picket

In response to civil disobedience by climate protesters, the government has introduced draconian legislation restricting the right to protest - the Police, Crime, Sentencing and Courts Act 2022 and the Public Order Bill, which is expected to become law soon.

And in response to key workers striking, they are planning to crack down on the right to strike in the NHS, transport, education, fire and rescue, border security, and nuclear decommissioning.

...if it works, they’ll try and outlaw it

Rising gas prices are driving the cost of living crisis, both directly, through energy bills, and indirectly, through increasing the costs for goods and services. But instead of tackling the climate crisis and fuel poverty together by investing in renewable energy and retrofitting our draughty homes to make them warm and energy efficient, the government is opening up more oil and gas drilling in the North Sea. This backtracking on our climate commitments will do nothing to reduce energy bills and comes with a huge emissions cost. Meanwhile energy giants are making billions from the spiralling energy bills of ordinary households. Read more 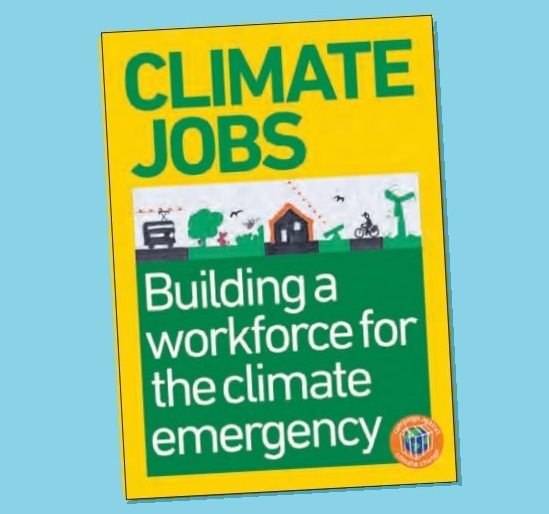 The report Climate Jobs: Building a workforce for the climate emergency was produced by the Campaign against Climate Change trade union group. You can find out more about the work of the trade union group and how you can get involved here.

The report provides a detailed and in-depth update of the earlier One Million Climate Jobs report, demonstrating that there are many more than a million good, well paid, skilled jobs that could be created if we get serious and urgently tackle the climate emergency, as the science demands. But to do this requires us to break from the failed reliance on the market and instead to invest in a huge expansion of public sector jobs across all sectors from transport, energy and food to homes, education and more, which are essential to tackling the climate crisis.

The report argues for a National Climate Service which can organise, plan, train workers and deliver the jobs so urgently needed. The changes needed are ones which will improve our lives, ensuring among other things we have warm homes, a fully integrated public transport system and most importantly a safe climate now and in the future. Find out more.

Practical support often has to be formally approved by passing a motion, but can include:

Affiliation to the Campaign against Climate Change

Finally, local branches can affiliate to the Campaign against Climate Change for £25 a year – and they could also forward motions to district and regional committees urging them to affiliate, and even to their national conference calling for their union to affiliate at a national level too.  More information on affiliation here.

Please let the Campaign against Climate Change Trade Union Group know how you get on: email climatetradeunion@gmail.com

Photo of climate march in London during COP27, taken by Claire James